​The last event of the 1995 series. Team orders towards the end of the prior event, the Spanish Rally, meant that Colin McRae had to relinquish his win and give it to Carlos Sainz, something that caused considerable controversy. However, Colin would go on to win this event and become Britain's first WRC Champion. His brother Alister would also be in the top 5 and his dad would win the historic version of the Network Q!

1995 was the seventh consecutive year that HORIBA had backed Trevor and Dave in the RAC Rally and this was the best result yet - 75th overall and 2nd in Class. From 15 starters in A5, including works Skodas, the result was a tribute not only to the team's performance but the resilience of the Mini and sterling efforts from the service crew.

The rally which was based in Chester ran over four days covering 320 stage miles over 28 stages and 1000 miles of link sections. New for this year was the pre-event rally show at the racecourse, which included the scrutineering for the works teams and an opportunity for fans to meet the top competitors. It drew over 8000 spectators, showing how popular rallying had become.

For Trevor and David and many of the lower order competitors scrutineering took place in a hangar at British Aerospace in Chester. The Rescue and Fire teams provided fluids and help for those who needed it making scrutineering a very pleasant affair. Trevor and David did not have the time or resources for prior recces of the stages, but the organisers provided generic pace notes which worked well.

Day 1
Typical wet conditions prevailed with misty morning starts and wet slippy stages. A number of the water splashes would cause problems for competitors including Carlos Sainz who once again would smash his radiator on one of the spectator stage splashes (Carlos would go on to finish 2nd in the event behind Colin). The start was in the morning of Sunday, the 19th of November, consisting of seven special stages in parks and private estates with facilities specially catering for spectators. It began with a stage at Tatton Park which had wet slippy tarmac and some rough gravel sections. Then it was off to Chatsworth House, a transport section where Trevor and David were significantly delayed by a large slow moving Victorian stage coach which occupied the whole of the road! Chatsworth (SS2) famous for its jump and two watersplashes which always provided great photos (and problems for Carlos Sainz).  After Clumber Park it was off to the two super special stages held at Donnington Park circuit (SS 4&5) which were as dry as Tatton was wet but due to their start time they were tackled in the dark. The artificially created corners at Donnington were tricky and many competitors slid off on the grass and clouted some very firm straw bales. Colin McRae included. After two further stages at Rother valley and Leeds the day ended with a night stop at Leeds.

Day 2
The cars went northwards just entering Scotland before returning to Chester via the western side of the country and two stages in the Lake District. Trevor due to his start number did not have to suffer the 5am start of the front runners for the first stage of the day in Hamsterley (SS8) and in fact had a delayed start due to a spectator collapsing and dying by the roadside near the end of the stage. Hamsterley would present significant problems as a particularly hard landing in the water splash at Hamsterley Ford pushed the sub frame back with such force as to break both "teardrops" and for the front member to severely damage the oil filter. Lady Luck smiled though because the filter remained leak free, but worryingly the service halt at Hexham between Hamsterley and the daunting 37 mile Pundershaw stage was restricted to a meagre 20 minutes. The service crew found it impossible to straighten the sub frame sufficiently to effect an oil filter change within this tight time frame and had to accept to hope that all went well as the blue Mini departed for Pundershaw (SS9) in the Kielder forest. Lady luck remained with them and Kielder passed successfully and a satisfactory replacement of the oil filter was made at Penrith – all credit to Nimrod and Roger who in the dash to the next service halt had sourced a shorter, compatibly threaded, Renault oil filter that could not possibly foul the front sub frame - whatever the circumstances. The remaining five stages would take them into Scotland during SS11 (Wauchope) and return them to England during SS12 (Kershope) but the penultimate stage SS13 Grizedale West which should have been one of the hardest stages due to its continuous bends, deceptive crests and firebreaks was temporarily stopped as one spectator had collapsed and died and another had fallen off a wall and sustained a broken leg necessitating air rescue. Cars running 68th to 119th were given the same time, as the 67th car and the stage was then re-started for the remaining cars. As Trevor and David were running 110th they were part of this group. So off to the final stage SS14 Grizedale East which was a short stage just under 5 miles before finishing for the day back at Chester.

Colin dropped only two minutes following a puncture in Pundershaw SS9, as competitors lifted his car while they changed the wheel but this would still drop him significantly behind Sainz. So started a recovery bid which would go down in rallying history. On Kershope (SS12) Colin's charge would only slightly falter when he hit a rock which claimed a front strut and the tyre rubbed on the wheel arch until going flat, so another wheel change and the use of brute force and a log to bend the bodywork to avoid a repeat puncture before limping from the stage finish to service 45 miles away. Colin then steadily whittled away at Carlos Sainz's lead with stunning driving in the forests over the next two days of the event, in what has been acknowledged as one of the greatest recovery drives in WRC history.

Day 3
Heavy rain fell overnight and continued throughout the morning and dense fog would be a real challenge but Trevor and David made steady progress throughout the day without any undue dramas. The rally focused around Mid and South Wales, with two special stages to the East of Machynlleth, four more around Brechfa and to its east and one further northward. It would be on SS21 (Hafren) that Colin would overhaul Carlos Sainz and return to the top of the leader board. That night the stopover would be back at Chester.

Day 4
On this, the final day of the rally, the seven special stages were again in a very wet Wales, three in the Machynlleth area and four more in Coed Clocaenog.  Again, Trevor and David made steady progress with the only challenge coming from a collapsed nearside rear bearing and damper mounting point in Gartheiniog which made the handling of the mini a challenge, fortunately it could be repaired at service in Dolgellau. It is worth mentioning that the practical and moral support of the other Mini crews, particularly Dave Johnson and the Plant brothers at Dolgellau was greatly appreciated and helped ensure a finish!

The spectators were in abundance lining the final two stages in Clocaenog, clearly in high spirits after the win by Colin who had passed through over an hour earlier, they were very vocal in support of the three remaining Minis as they went by. ​Trevor had a short run back to Chester and the finish - 2nd in class, an excellent result. 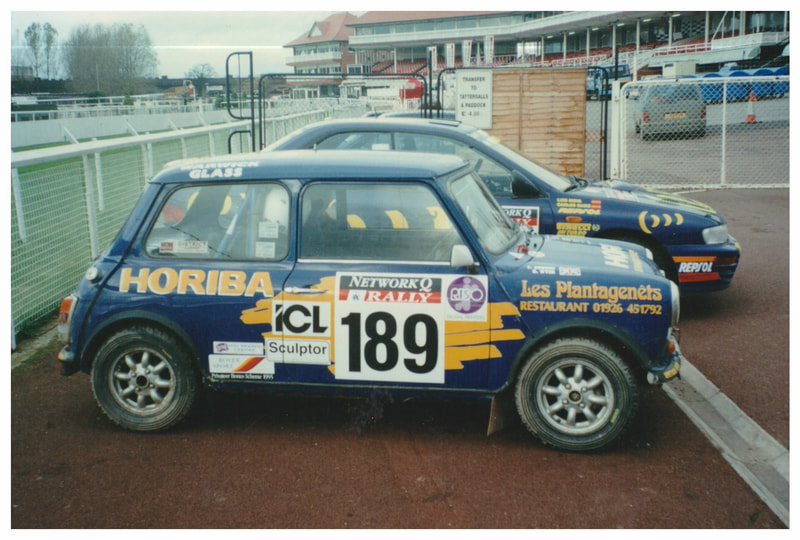 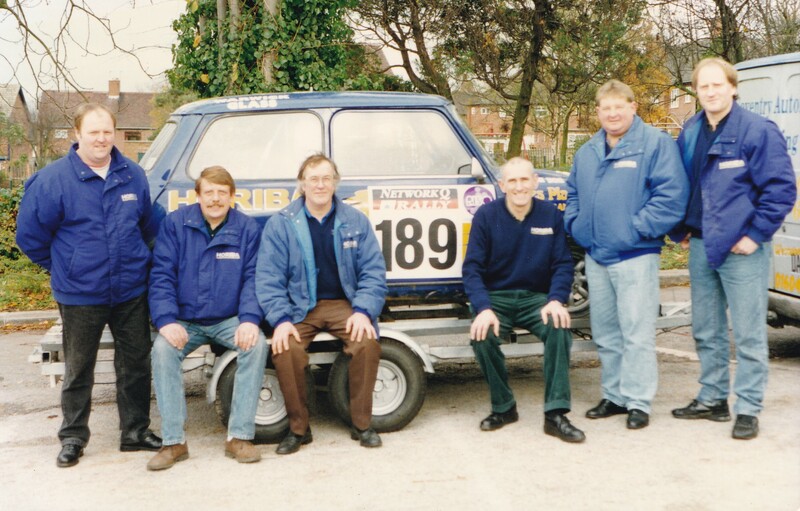 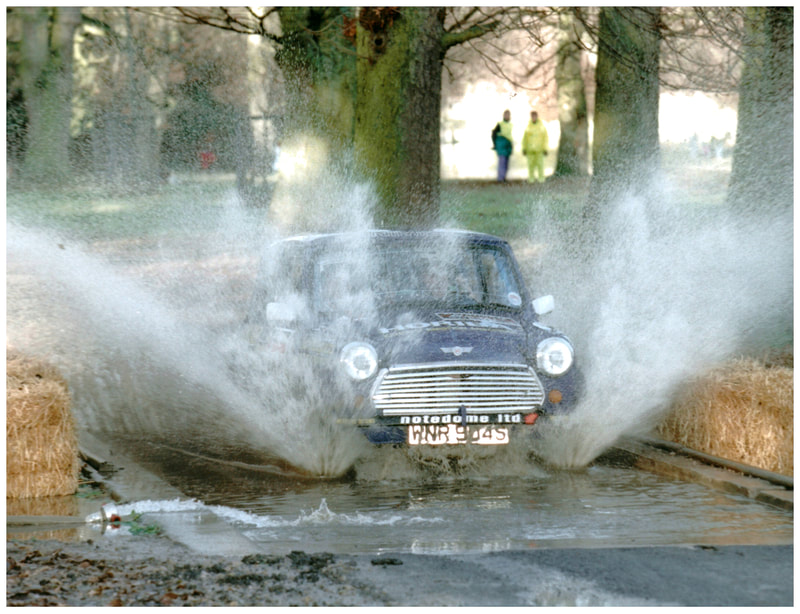 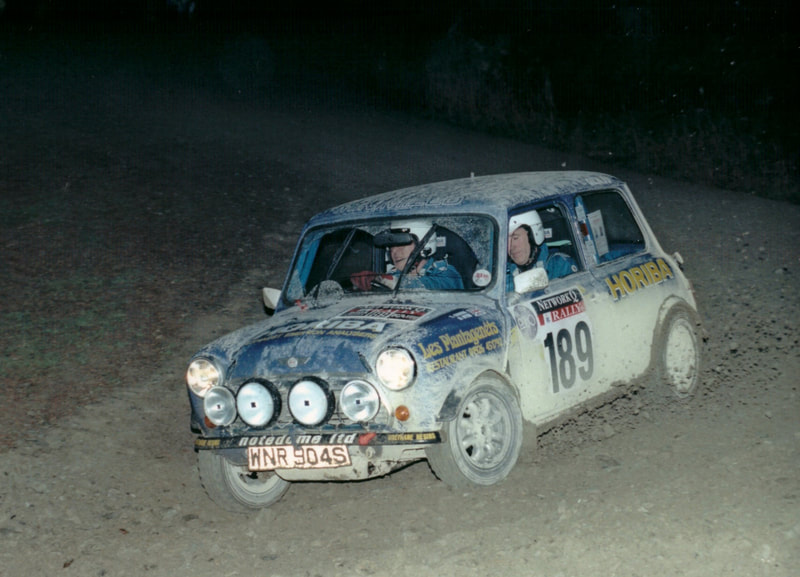 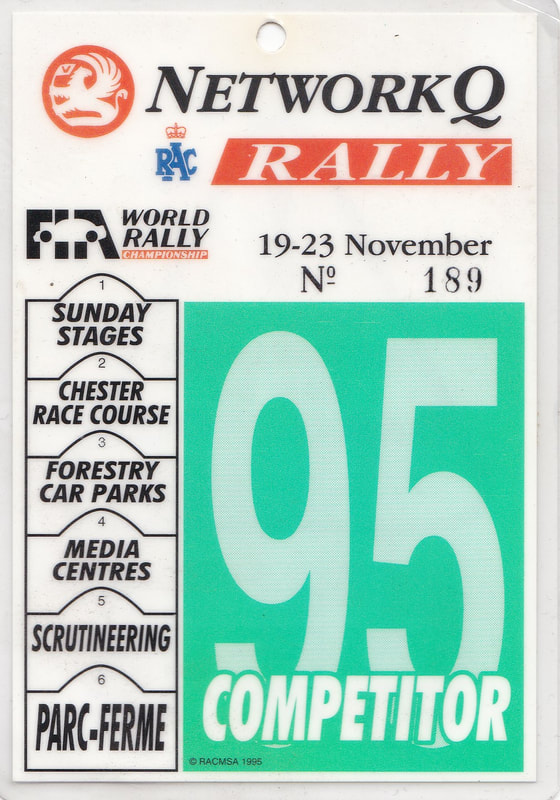 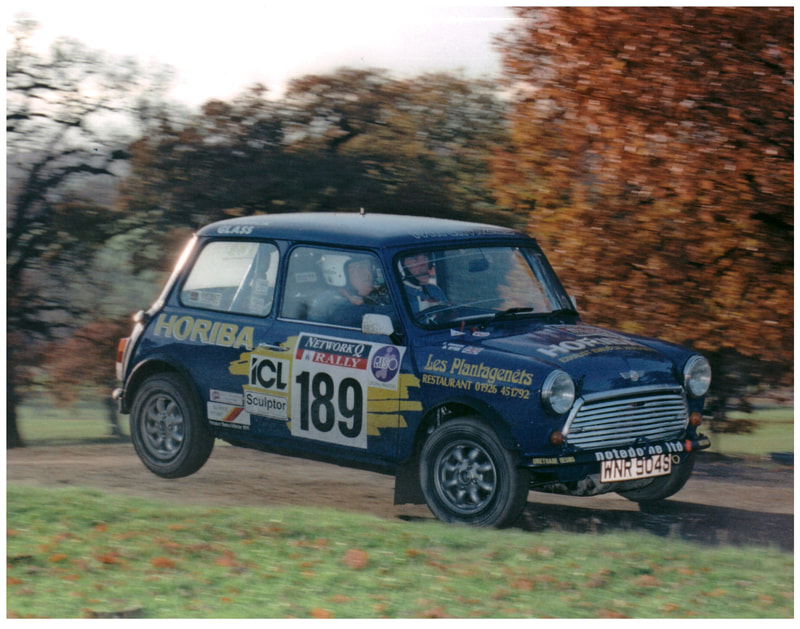 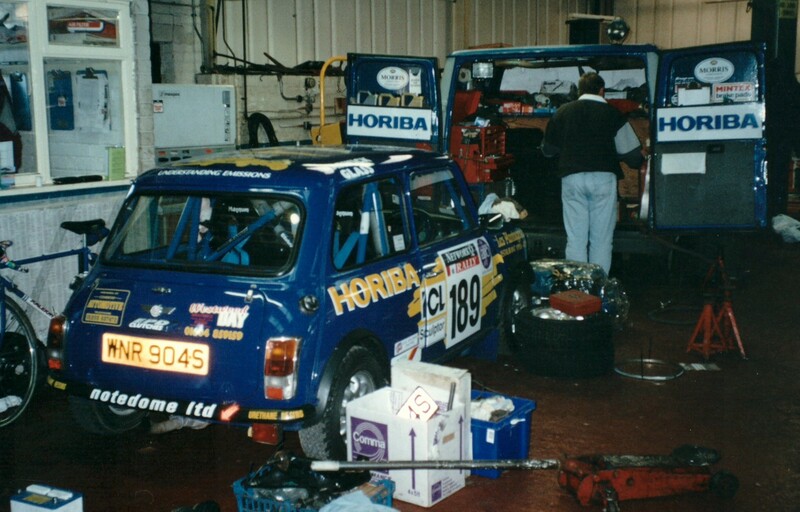 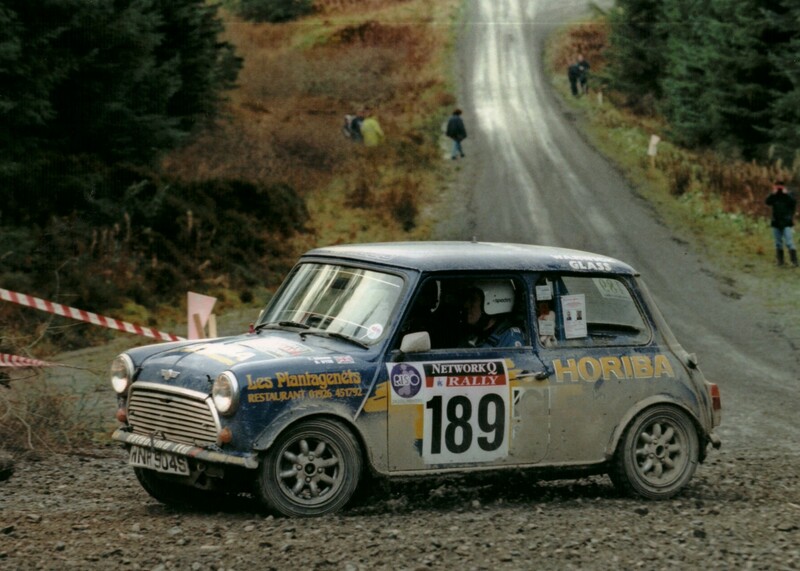 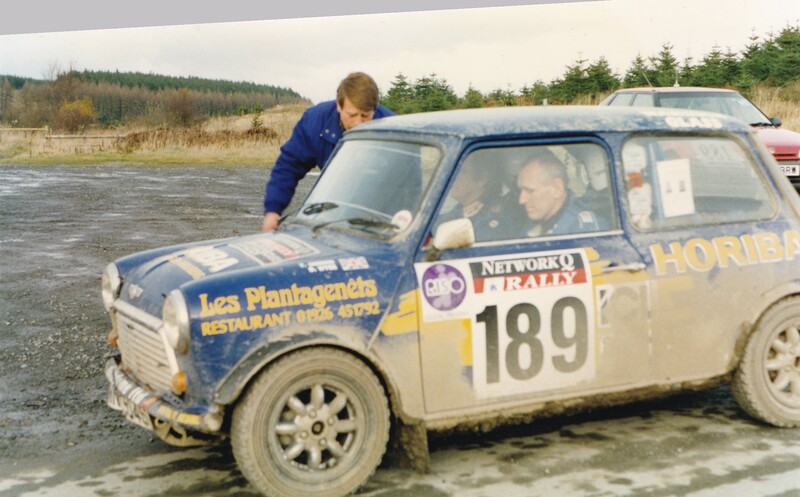 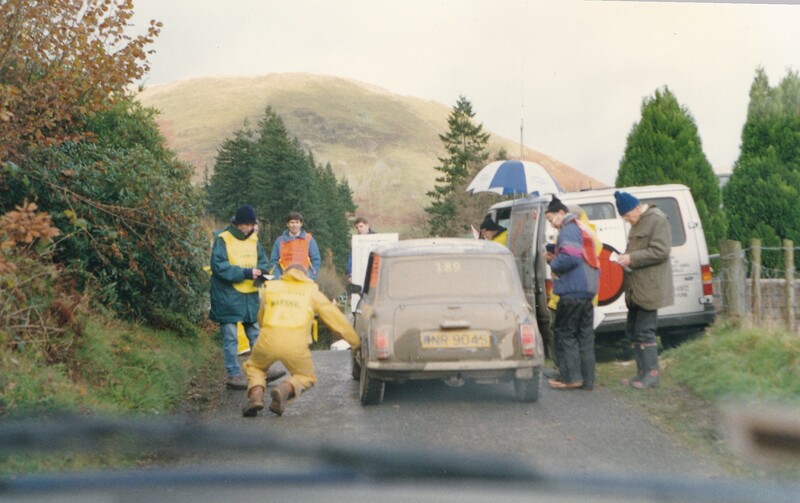 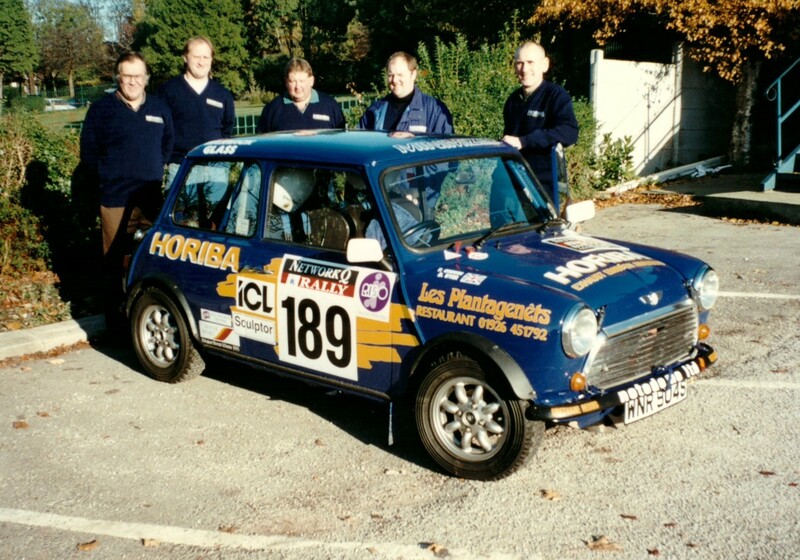 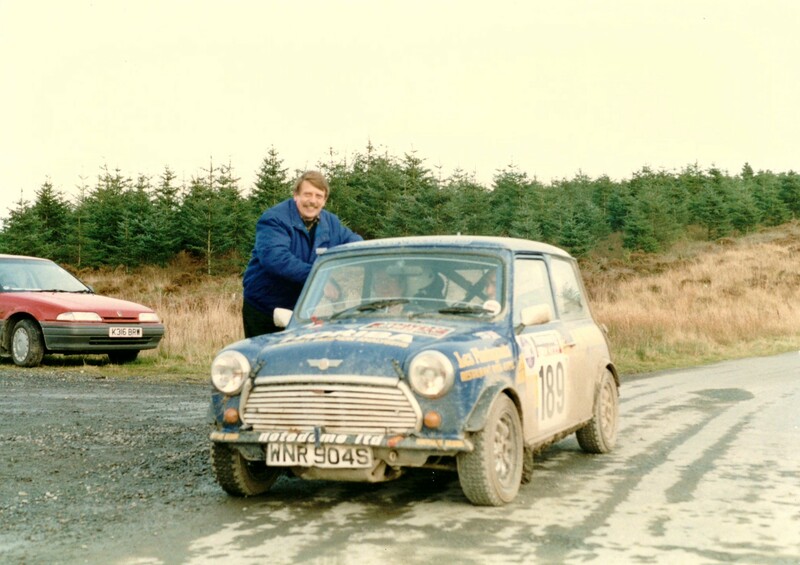 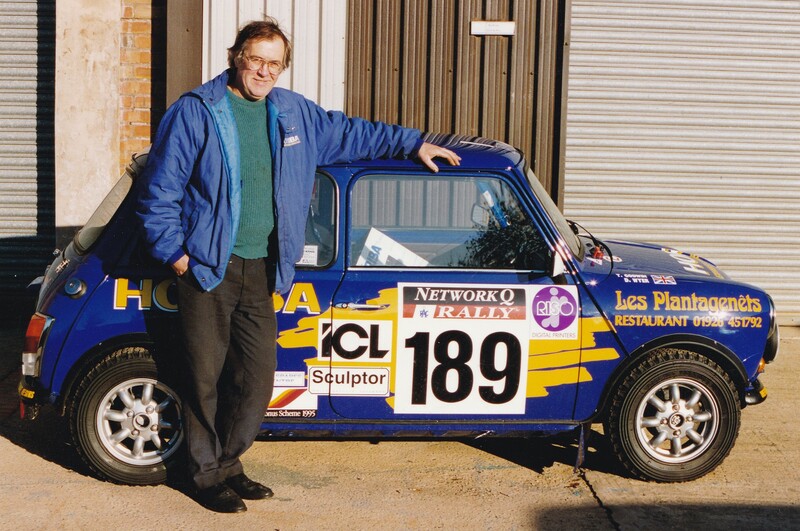 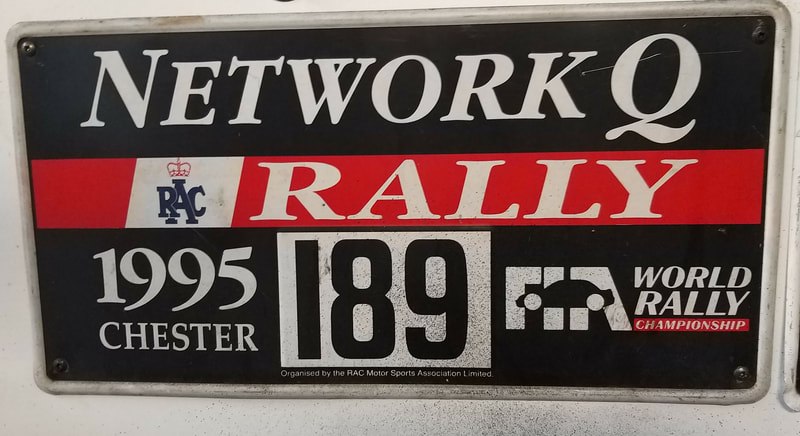 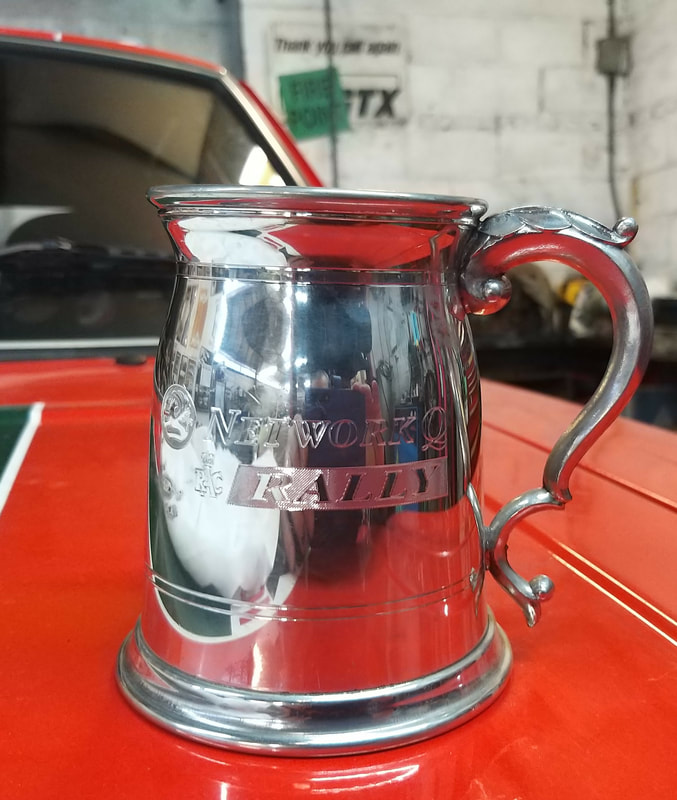 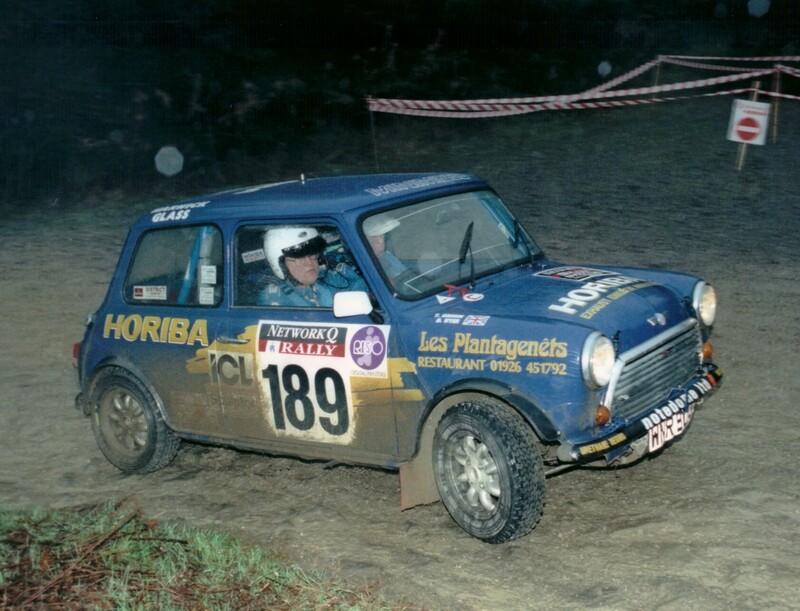 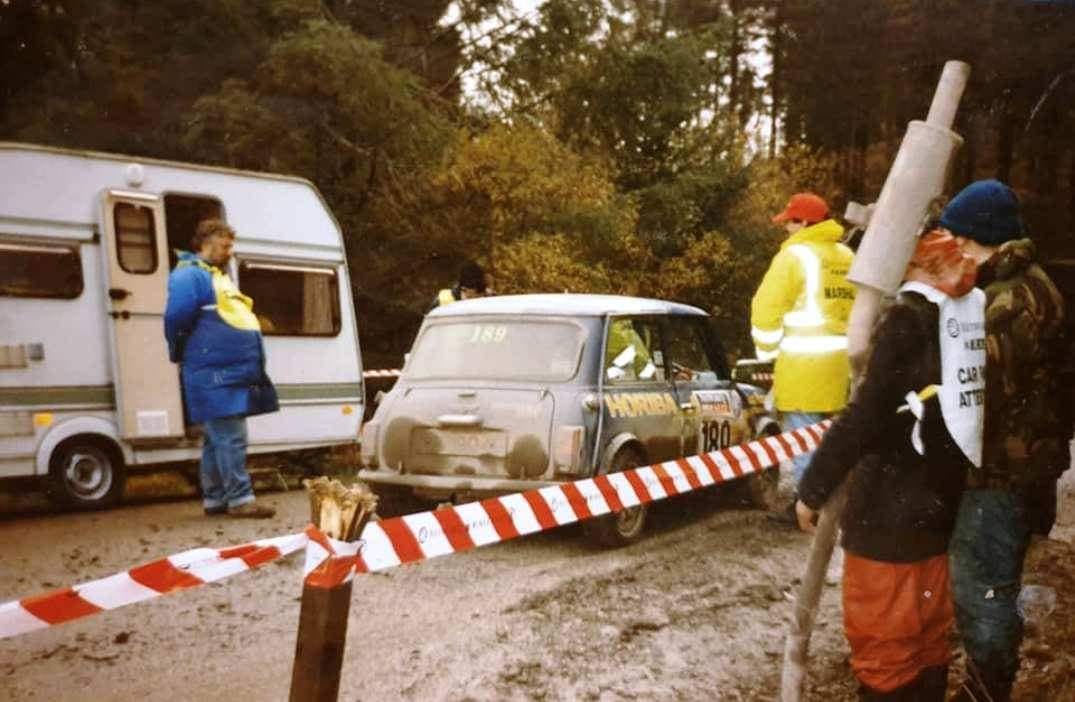 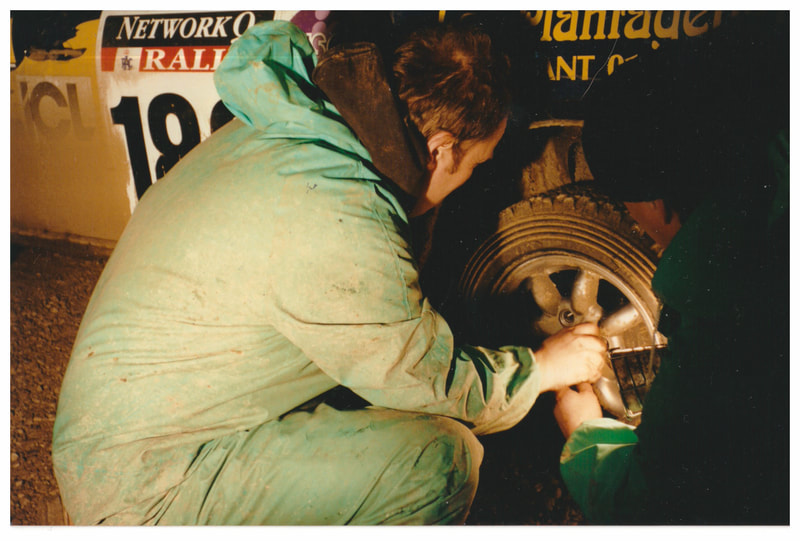 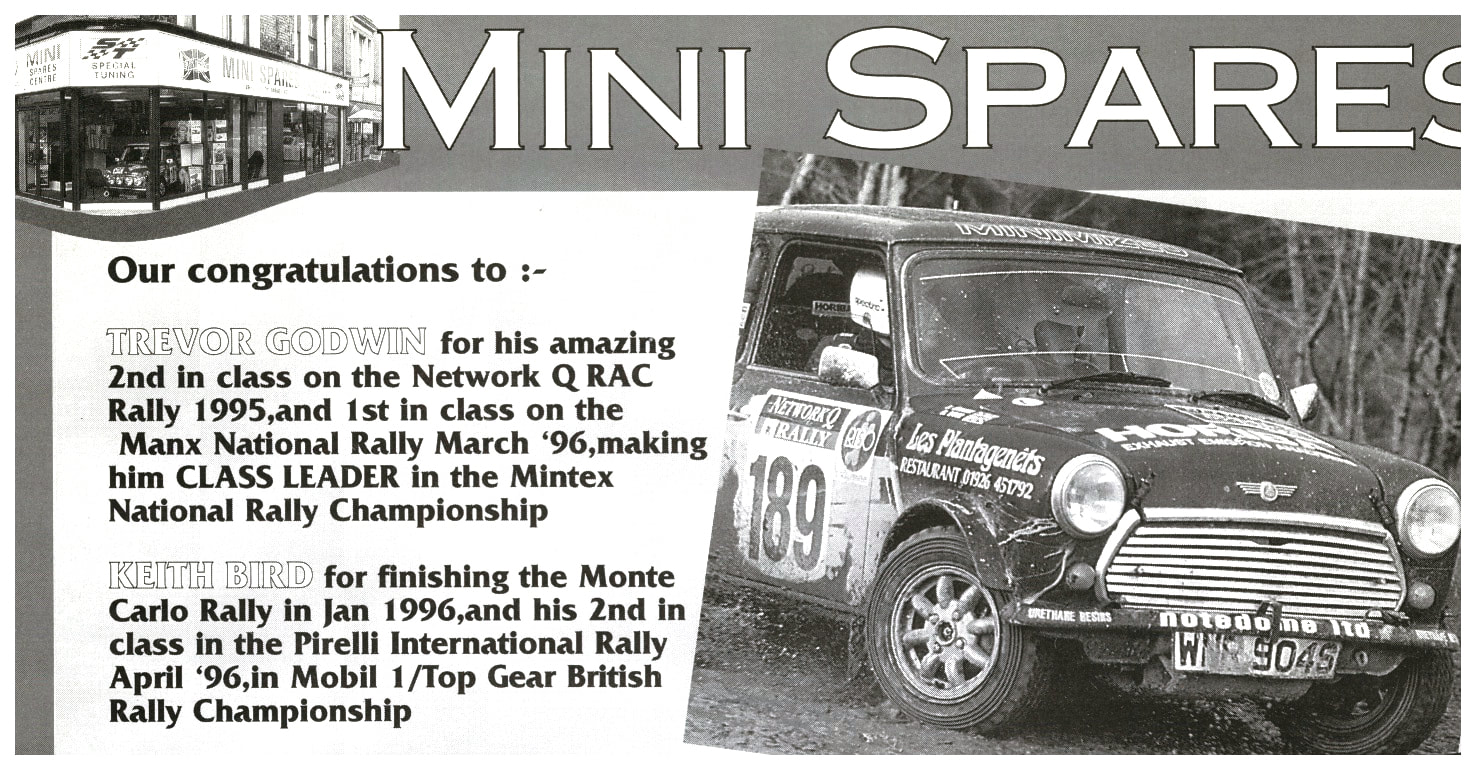 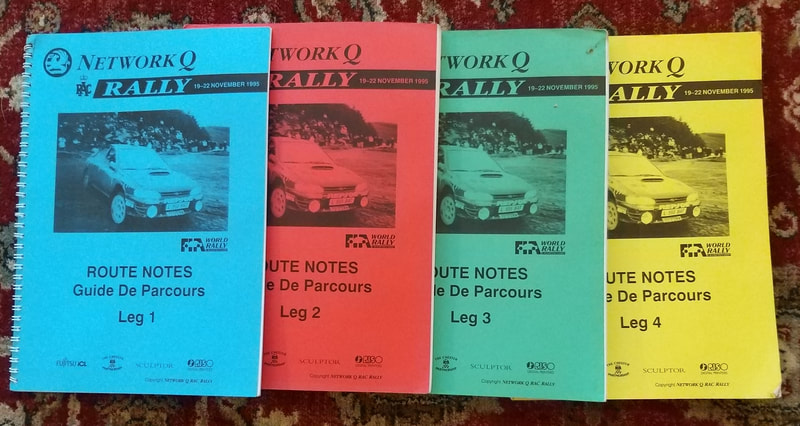 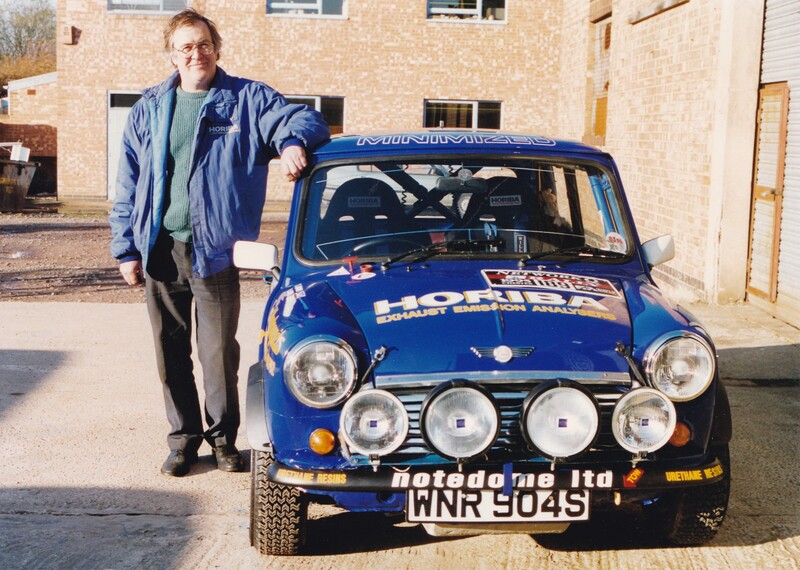 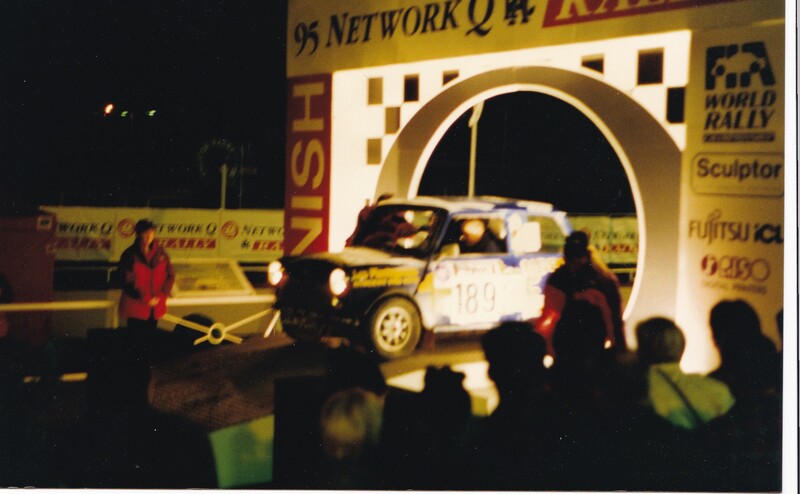