Day 0
Mini packed, excitement levels at maximum, as dad and I drove from Yorkshire, down through England and a Ferry crossing with a short drive to Paris. It became rapidly apparent that a rally Mini with little sound insulation and straight cut gears is DEAFENIING! Ear plugs purchased hastily from a pharmacy in France - sorted.
Days 1-2
Saturday 5th & Sunday 6th September: Versailles to Andorra
Big crowds and an early start from the Palace of Versailles on Saturday morning and a blast along fast open roads to a Time Control just north of Clermont-Ferrand. From here, the rally headed south through the Massif Central and over the Black Mountains in blazing sunshine to breakfast at the medieval walled town of Carcassonne. After breakfast, a short but scenic morning's run through the foothills of the Pyrénnées to the final picturesque climb into the mountain Principality of Andorra, for a welcome overnight halt after a 1,100km drive.
Day 3
Monday 7th September: Andorra to Ubeda
Another long drive ahead at just over 900km starting with the journey down from the mountains across the southern edge of Europe's only desert to the first Time Control of the day near Alcaniz. An interesting mountain competitive section with dad gunning the Mini up the steep twisting roads, before a welcome respite and lunch in the Teruel area. On to another mountain competitive regularity section, taking us to Aibacete by late afternoon and driving into Ubeda.
Day 4
Tuesday 8th September: Ubeda to Algeciras & Tangiers
An early start for the run south through the mountains of Andalucia, admiring the scenery of the Ronda valley before arriving at Algeciras, relatively few delays and a the short afternoon cruise across the Med before entering into Africa.
Day 5
Wednesday 9th September: Tangiers to Ifrane
Tangiers was busy, hot and some wonderful and not so pleasant smells assailed our senses. The rally cars were all parked up along the coastal strip and we had time enough to have a wander about this fascinating city. On the first full day in Morocco we left Tangiers and headed south into the Rif Mountains (traditionally a poor area, where our expression "riff-raff" is said to come from). On the competitive sections the kids would pelt the rally cars with stones causing dings and a few cracked windscreens. This is the first of the three parallel ranges of mountains which cross Morocco, roughly west to east. South of the Rif are the Middle Atlas and then the High Atlas, the snow capped rock barrier which protects the fertile northern part of Morocco from the encroaching desolation of the Sahara Desert in which we would be rallying later. After two tight sections in the Rif Mountains and a short pause to acquire multitude of burns, as I had to change the radiator bottom hose we descended into the hot central plain, passing many fascinating medieval buildings on the outskirts of Fes, the imperial capital, before ascending the Middle Atlas to reach Ifrane, the first night halt and the principal Moroccan ski resort. Tired, burnt, dirty but thrilled to be at the night halt offering beer, bath and bed.
Day 6
Thursday 10th September: Ifrane to Erfoud
Off again but this time along the eastern edge of the High Atlas, through the spectacular Gorges du Ziz with the vast expanse of the Sahara opening ahead of us. The route followsed a narrow belt of vegetation around the Ziz river to reach the town of Erfoud, on the edge of the wilderness, and our final rest-halt of the day. Arriving' at Erfoud, we had a competitive section on for a Paris-Dakar style circuit, forsaking the tarred road for stony tracks leading out into the desert... and a truly memorable experience. From a Time control at the Erg Chebbi, the first of the ranges of famous Sahara sand dunes, a tight competitive section across the desert, made of slippy shale such that it is similar to driving on ice and to return to Erfoud.
Day 7
Friday 11th September: Erfoud to Ouzarzate
Off westwards, skirting the northern fringes of the Sahara. For mile after mile, there were no villages ... there was no vegetation .. nothing but a barren rock desert like a lunar landscape. In the afternoon it was a ROUGH competitive section over 50 km of stony dirt roads with cut up river crossings. It was on this we sheared the nearside shock absorber mounting and the Mini’s handling became erratic. So we had to cut the next competitive section and head to Ouzazarte incurring a string of penalties. Fortunately, a ‘bush mechanic’ using a block of stone for an axle stand and our tools & Jack got the rear hub off, whereupon it disappeared off on a bike to be returned 1 hour later with an excellent bodge repair (which held until we made it back home). The last surprise of the day, was our hotel room was on the ground floor and the door had been left open to air. A huge sheep had taken a fancy to it and was sound asleep on the bedroom floor!
Day 8
Saturday 12th September: Ouzarzate to Marrakesh
An early start, taking a twisty, precipitous, main road through the incredible 100km Tizi-n-Tichka Gorge, to reach Marrakesh and an amazing evening in the souk and central square.
Day 9
Sunday 13th September: Marrakesh to Ifrane
Sunday and a hot, hard, 500km drive along the length of the pleasantly green and fertile Middle Atlas mountains, ending in a tortuously tight section through a pine forest shortly before the finish back at the ski resort of Ifrane. Things were complicated but the Mini bonnet flying off and tumbling down a gorge, much skin and time lost, as apparently bonnet retrieval is a navigators job!
Day 10
Monday 14th September: Ifrane to Tangiers
The final morning of the rally was a neutralised non-competitive back up to Tangiers the Buffet Supper & Gala Prize giving.
Day 11 - 14
A long drive, weary but happy, to Madrid for an overnight stop before taking the Bilboa-Portsmouth ferry home. 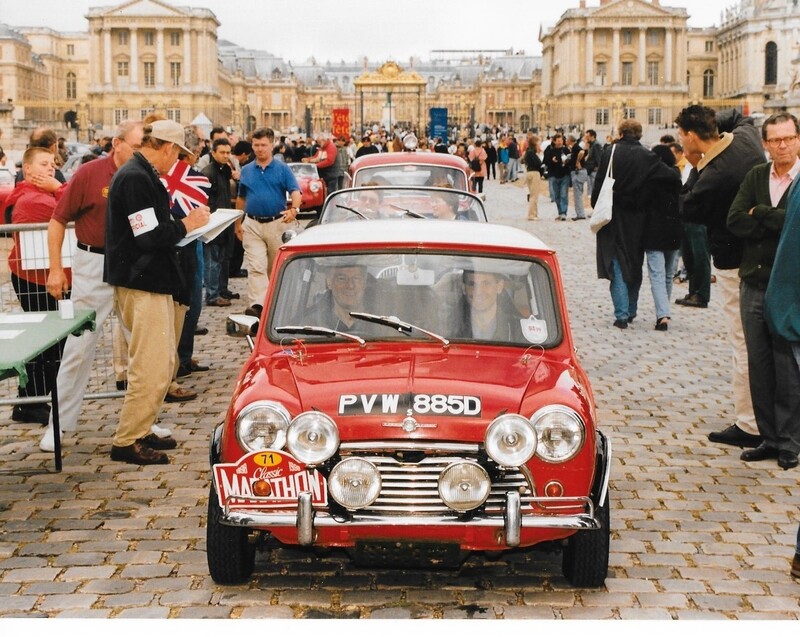 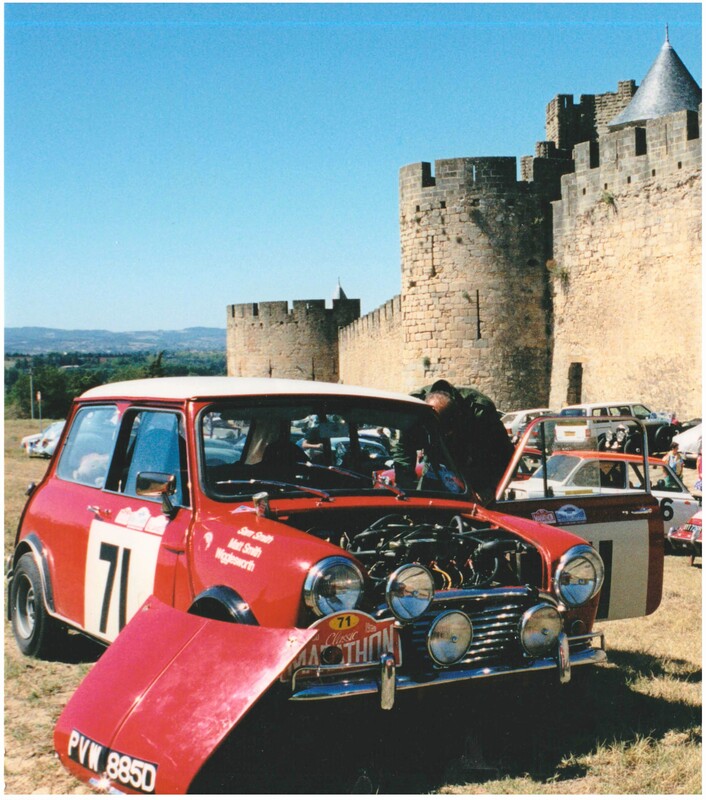 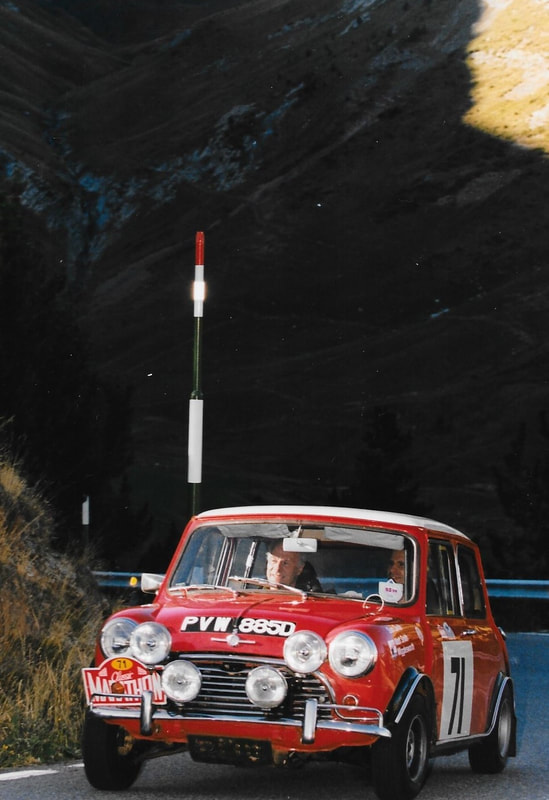 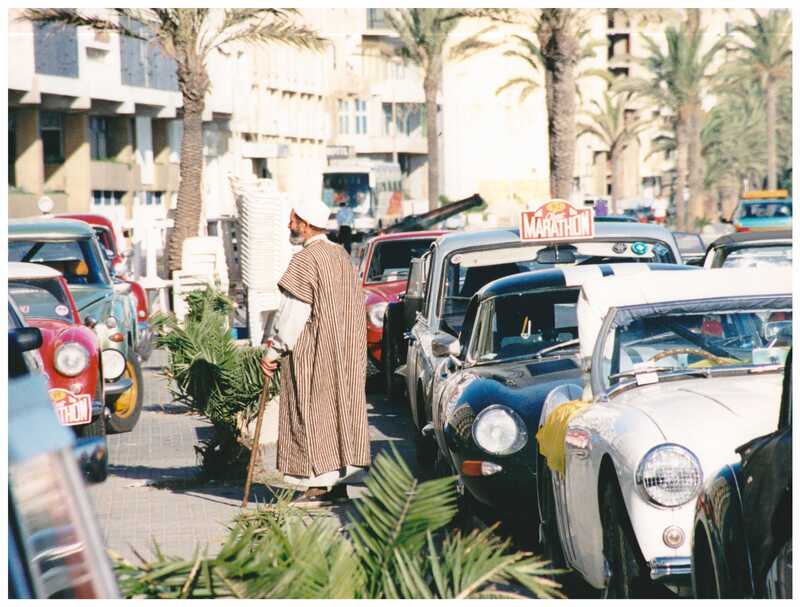 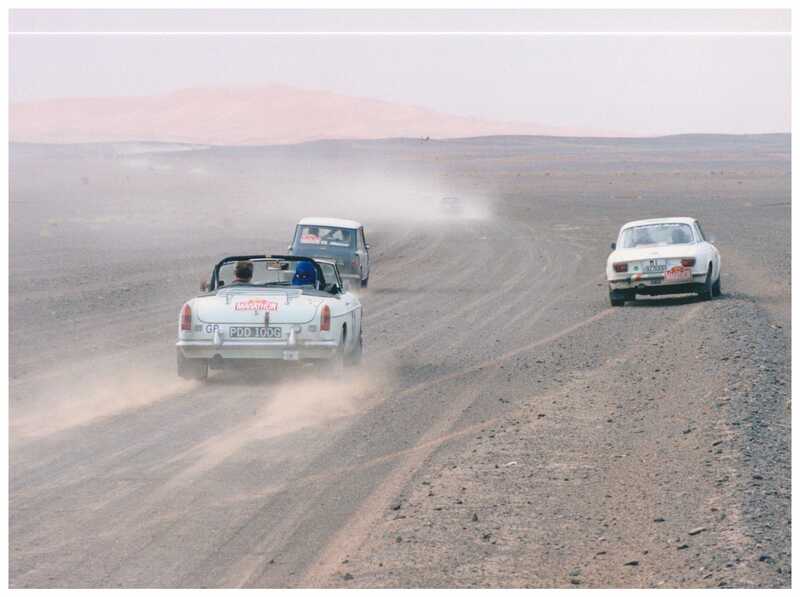 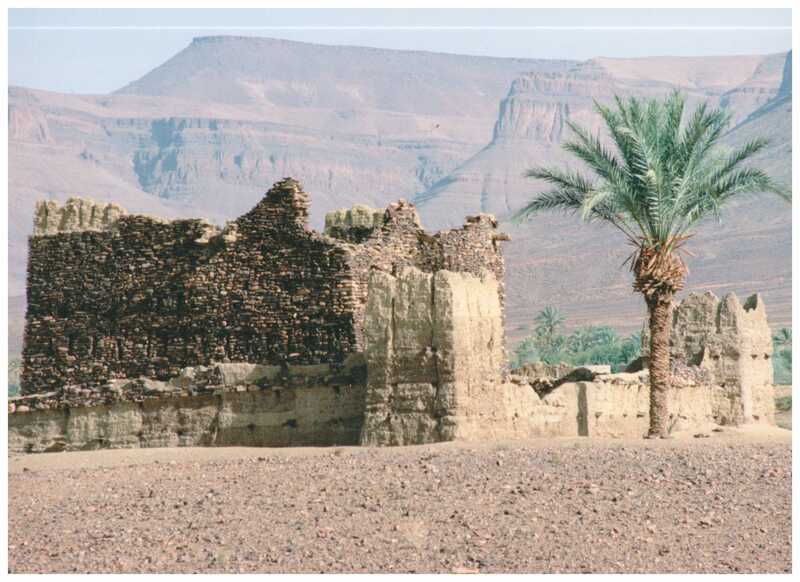 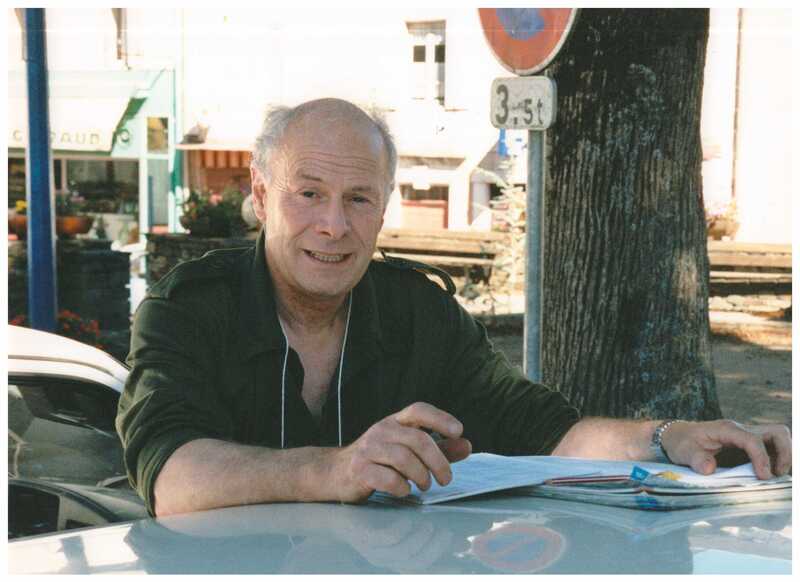 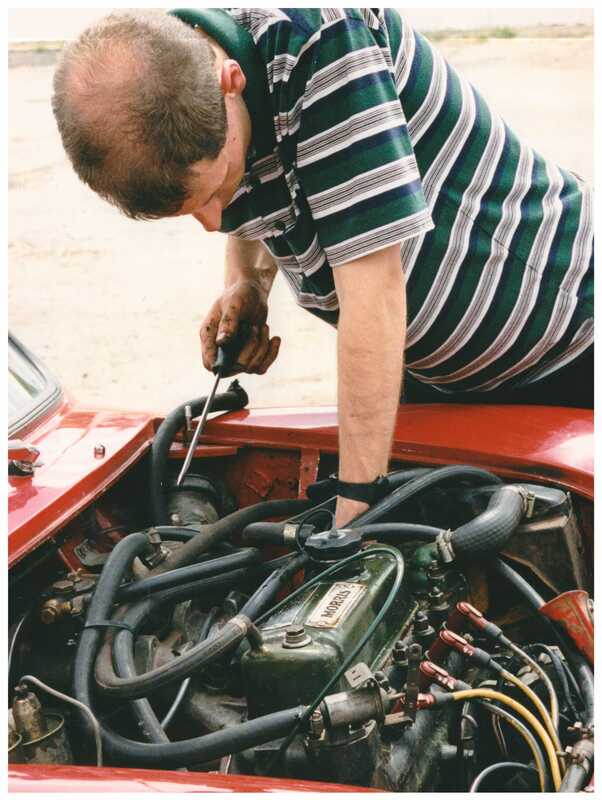 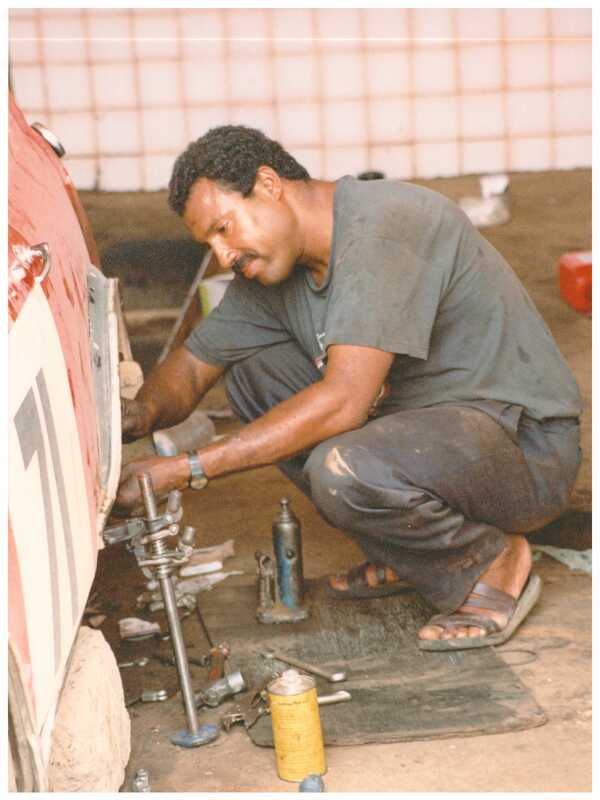 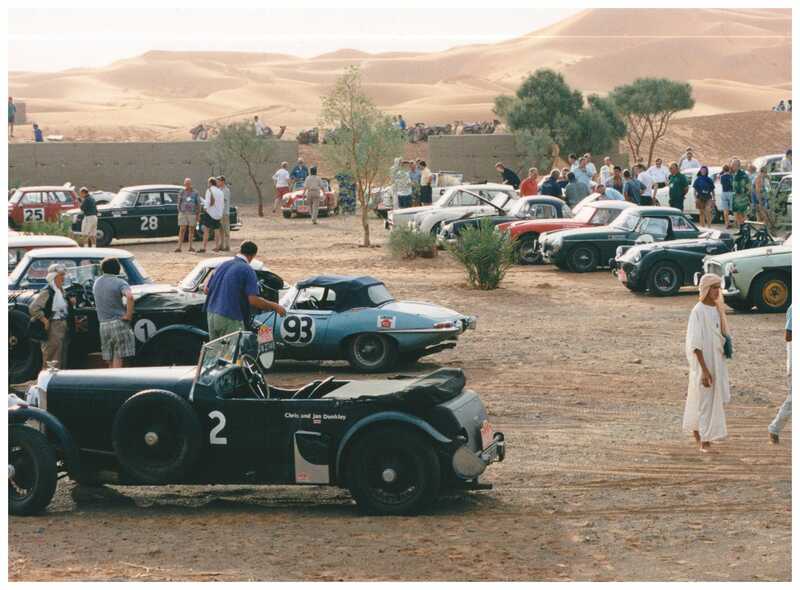 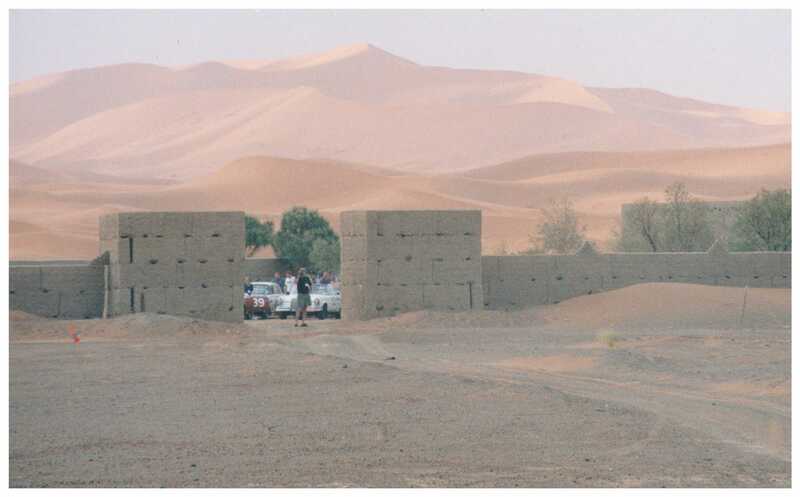 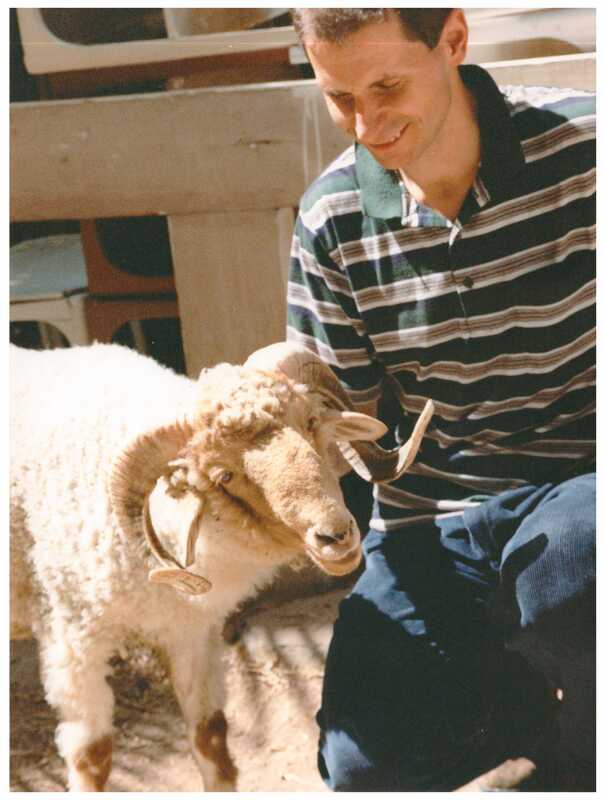 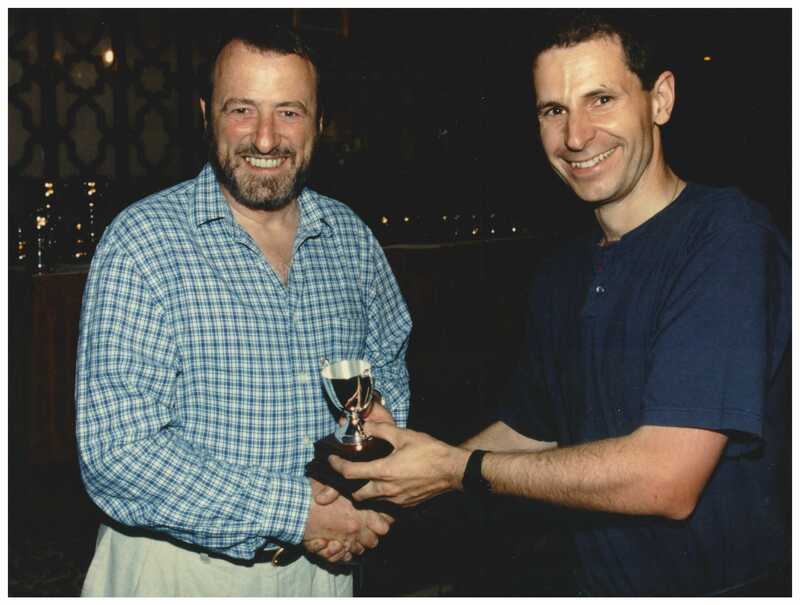 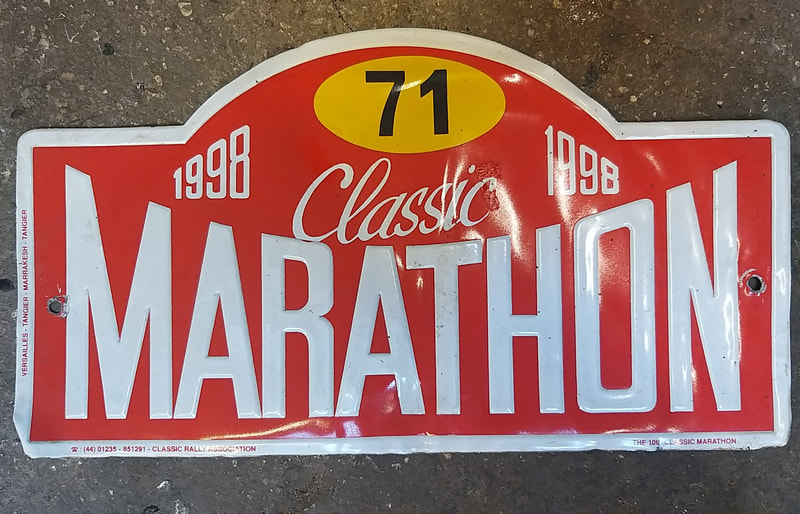