Neste Finnish Rally - Car 96, 56th and 4th in class
Trevor was navigated by Ian Harrop on this event

The WRC event, based in Jyväskylä, would comprise a total of 478km split over 3 days and 29 stages, most of which would be dry, cut up, rough gravel stages. It would be run as a clover leaf with crews returning to Jyväskylä after each leg. Tommi Makinen would win (his third consecutive win on this event), Juha Kankkunen second, Jarmo Kytolehto third, Marcus Gronholm fourth and Kenneth Eriksson fifth.

For the team's second appearance in the Finnish WRC round lan Harrop became Trevor's partner in the car. Having obtained his international qualification in 1995, this was lan's first international rally. Following a protracted trip involving four ferry crossings, the final one being of 12 hours duration (from Sweden to Finland) before the team arrived at the Rally HQ in Jyvaskyla. Unlike the camping in the town centre by a lake in '95 this time they were very lucky be put up for free by the MinFinns motor club in either holiday chalets or their own homes. The kindness and hospitality shown was amazing. Trevor and his crew were used to the Finn's passion for alcohol and partying during rallies but this time, as they were now part of the ‘motor club family’ they were expected to indulge in the Finnish passion for skinny dipping in the local natural hot pools which is very popular. Using the changing huts on the shore line Trevor and the team duly obliged (photos not added)!! This time they could not buy a copy of a fellow competitors pace notes and had only a little time for testing and to recce some of the stages, so they had to drive it blind with Ian calling the corners as he saw them. Info bulletin 27 reports 'The Mini crew are reported to be very brave, but stupid', for attempting to drive the event without pace notes.

The event was 1452 km in length of which 478 km were special stages (nearly all gravel/forest). Unlike last year it was hot and dry. A trouble-free scrutineering on the Friday morning preceded the traditional Harju stage through the centre of Jyväskylä. It was run in reverse order and as a result, the HORIBA - Coventry Automotive car was one of the first to go, but the stage was later cancelled following an unfortunate accident when car 65 left the stage, the sump guard bending underneath the car making it unsteerable, and it slid 80 meters colliding with the assembled spectators requiring 28 spectators to be taken to hospital. One spectator unfortunately died of his injuries.

​Saturday SS2 to SS11 with two long stages over 30km (SS8 Ouninpohja and SS10 Vaheri). As opposed to last year the weather was hot and the rough gravel stages dusty with dust hanging in the air from prior competitors. To make matters worse, following an incident on the second stage, after running wide a stone or tree stump was clipped leading to a bent steering arm and tie rod, as well as a split sub frame resulting in some very errant steering. Two stages had to be survived, needing some skilful driving, before the team's service crew were able to remedy the damage with a welded repair. A very long, hot and dusty day was challenging for both car and the Coventry Automotive team. In the rally press information bulletin -34, Trevor is quoted as saying on day 2 "We still don't have pace notes but are definitely driving fast without them. The car is so hot it feels like a Finnish Sauna!"

One of the up sides of this hot Mediterranean weather was that the midges in the early morning and evenings were less voracious than last year when Trevor thought he might need a blood transfusion, as he had been bitten and sucked dry by a multitude of mosquitoes and midges in 1995.
​
Colin McRae was also having a bad day, after the first couple of stages he admitted "I can't get it right at the moment. Sometimes I'm turning in too early, sometimes braking when I needn't.". On SS6 he clipped a bank and rolled out of the event and received an ear bending from his boss Dave Richards at the end of the stage.

Sunday SS12 to SS23 was a hard day for both competitors and cars. The final day's stages were so demanding one of the pundits suggested they should simply give the competitors sledgehammers to batter their cars with, instead of making the drive through the stages, to achieve the same level of destruction. Trevor and Ian, however, survived the day without any major problems other than the heat, dust reducing visibility and the fatigue of driving long hard stages, day after day.

Monday SS24 to SS29 was the final leg and had some very long stages, SS27 (Jukojarvi-1) and SS29 (Jukojarvi-2) over 20km and SS25 (Parkkola) was over 30km. Our intrepid pair, had things under control and the stages were flowing nicely. They were challenging for third in class against a Peugeot shod French competitor which seemed initially, to be beyond reach. However, by the end of the leg the gap had closed and third in class was only conceded by 18 seconds. Fourth in class and 56th overall was the final result. Carlos Sainz, who was pushing Tommi Makinen hard on the WRC, would go out on the final stage when his gearbox failed providing Tommi with impetus for the WRC championship bid.

The 1000 Lakes presented an attractive proposition to non-Finnish competitors as the team were able to secure both a free entry, enthusiastic local service support and minimal ferry charges to assist in the expense of a WRC International event that proved excellent value. ''Prudence is the name of the game" agreed Trevor and Ian "Under these circumstances three days in Finland rivals the expense of just three National A Events!" Food for thought indeed. 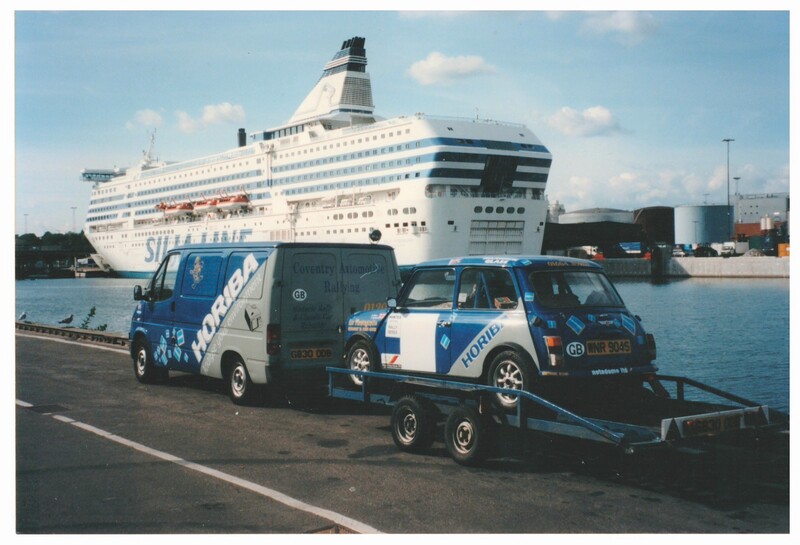 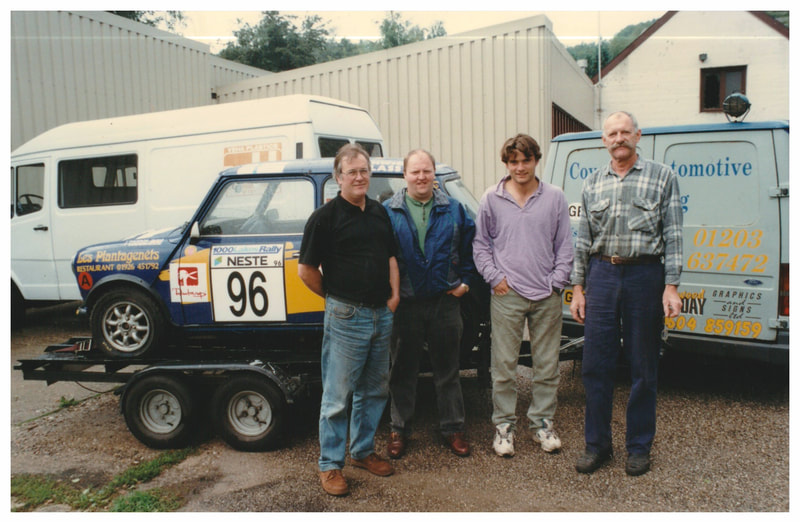 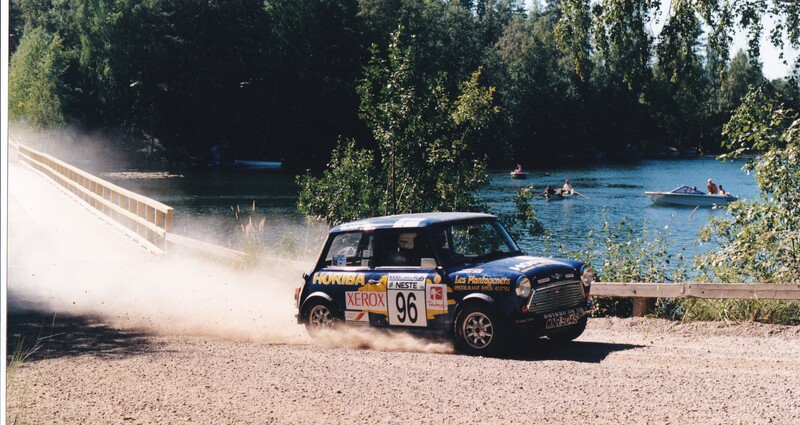 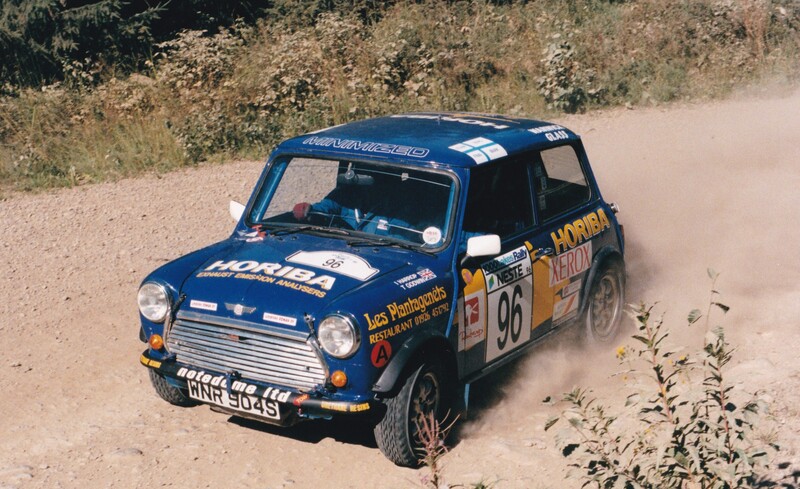 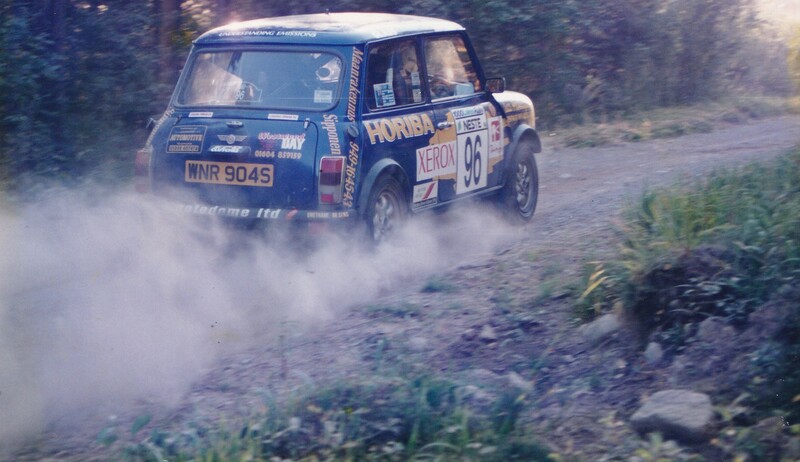 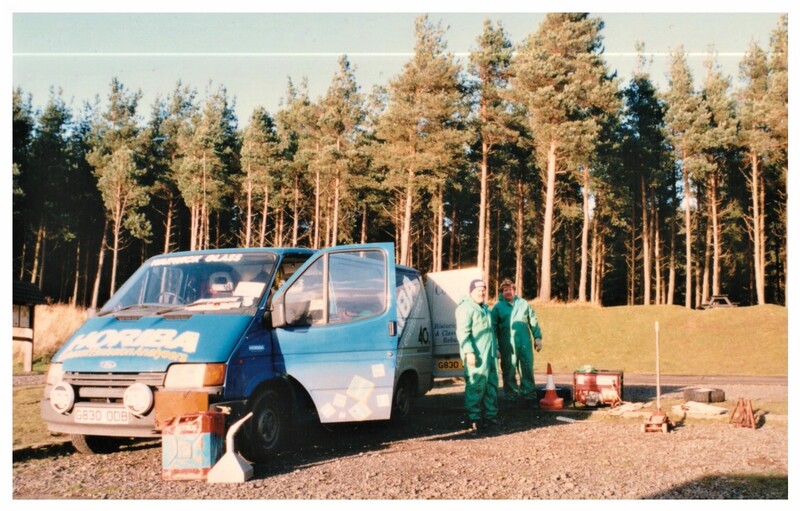 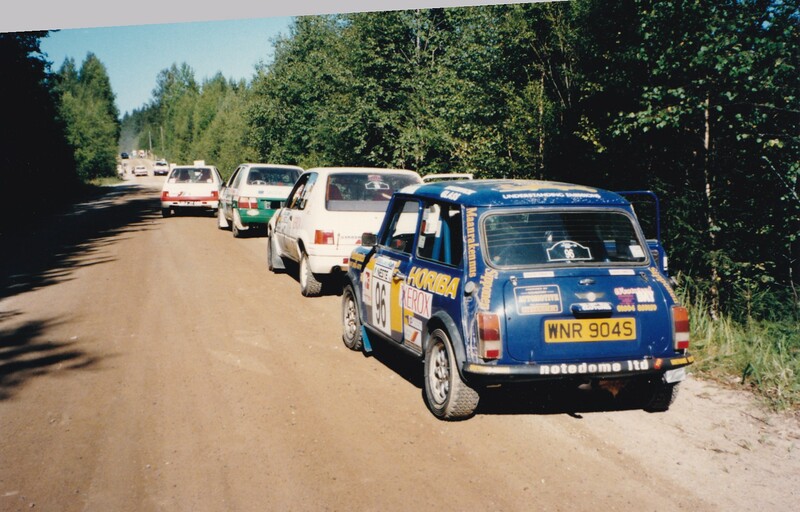 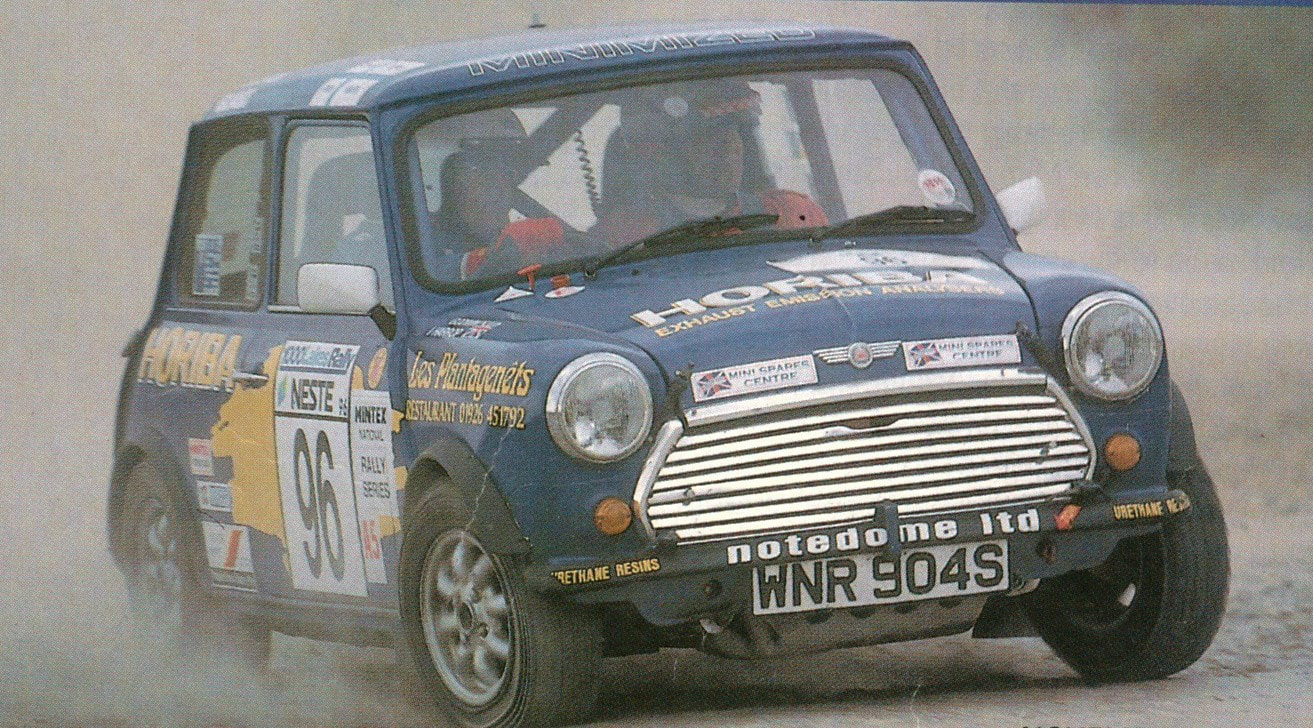 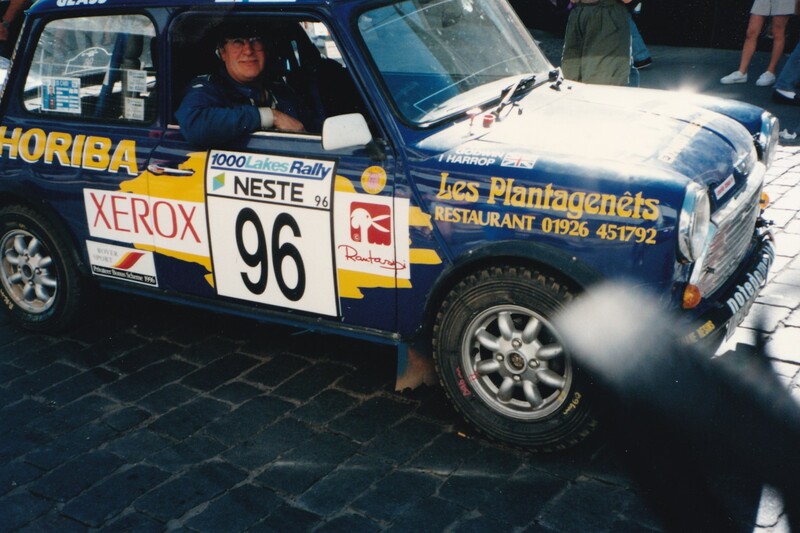 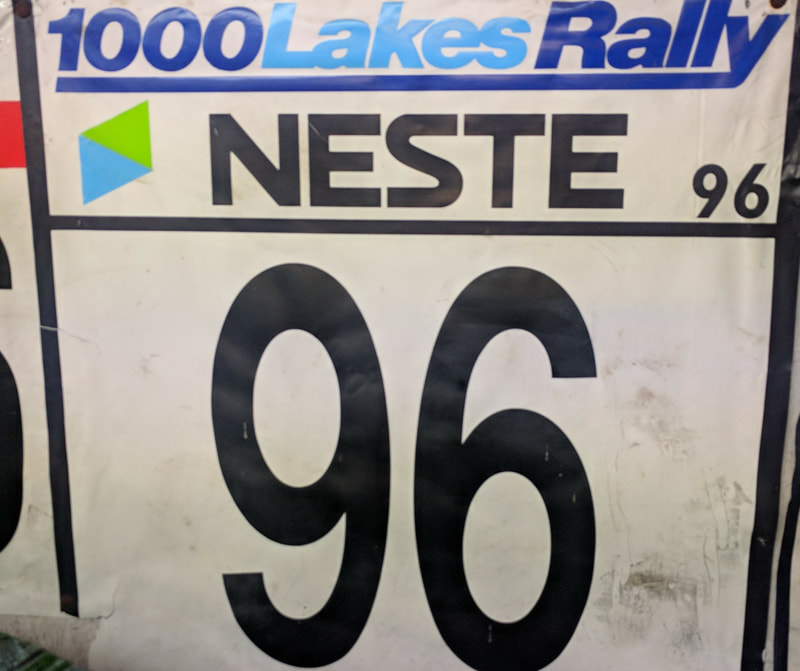 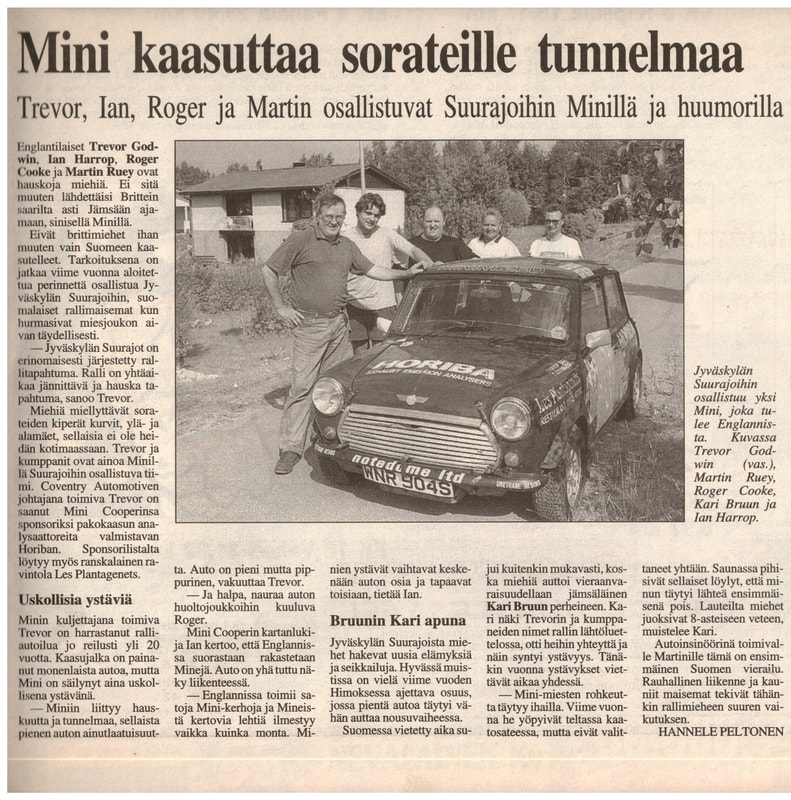 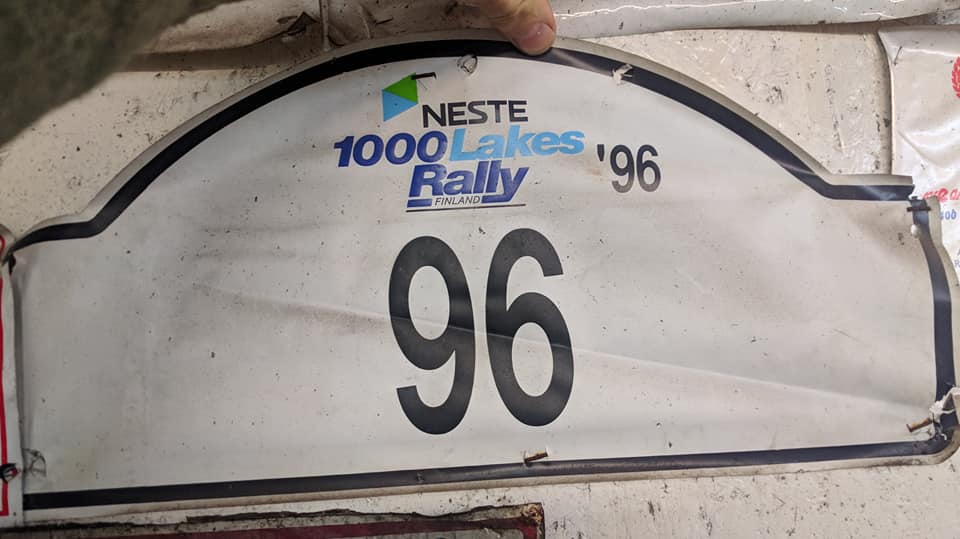 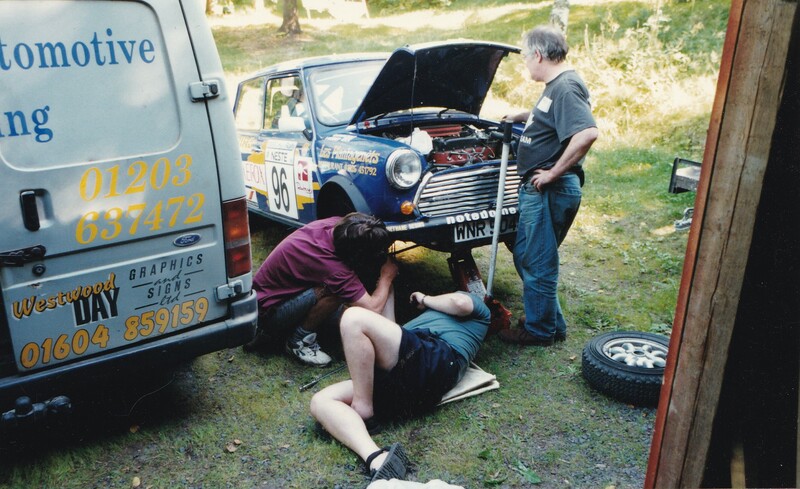 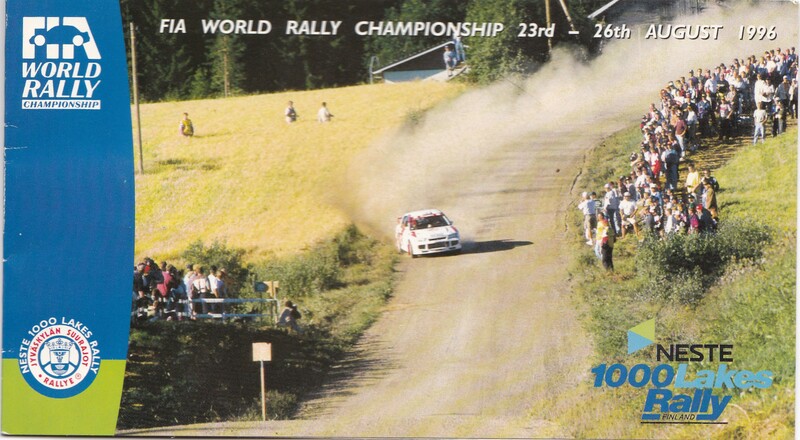 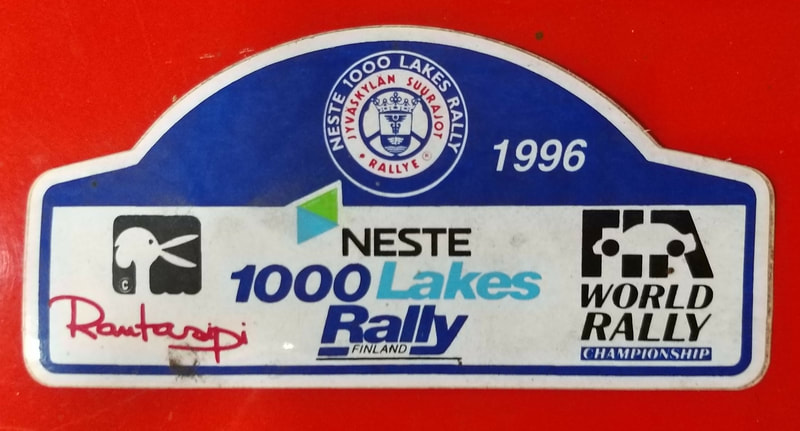 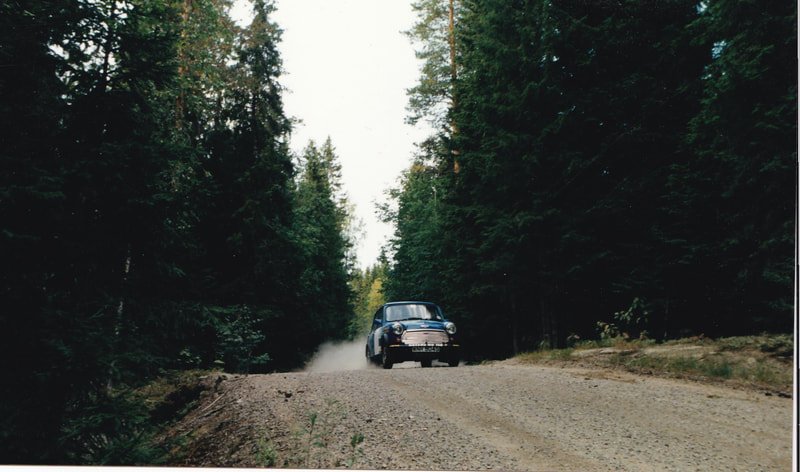 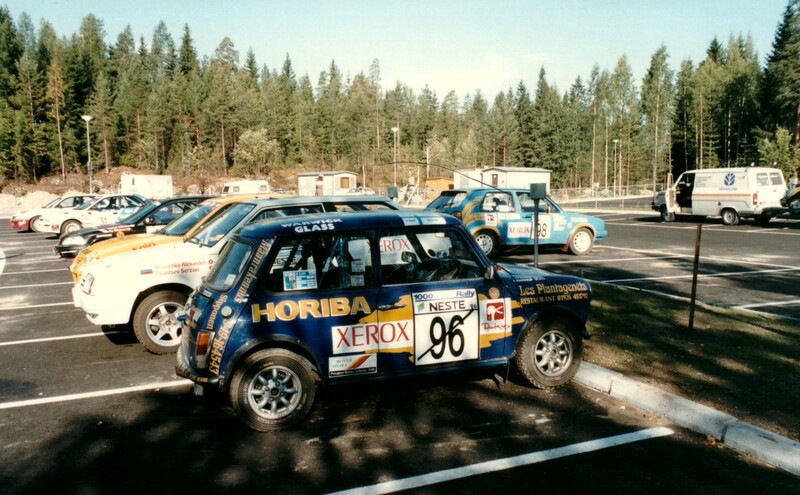 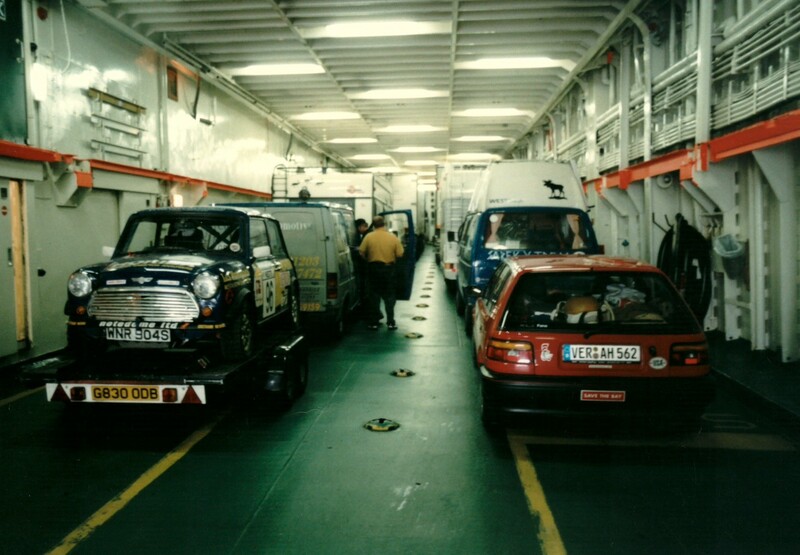 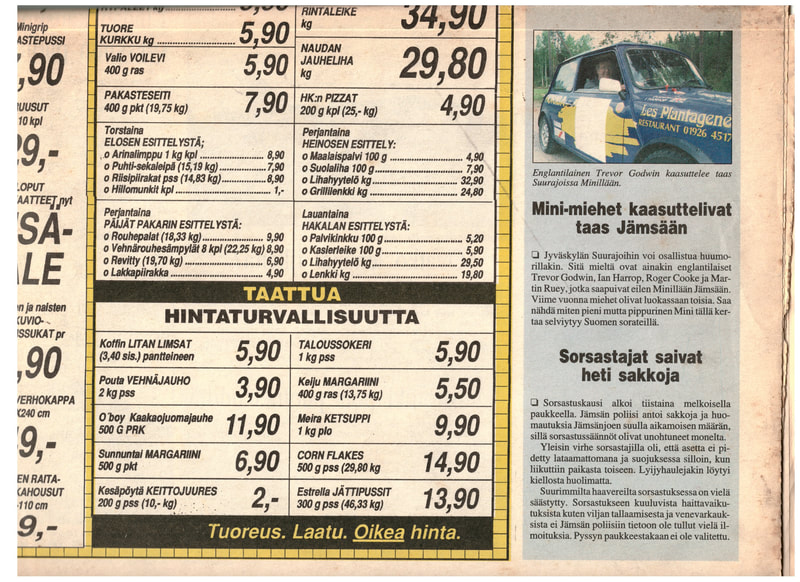 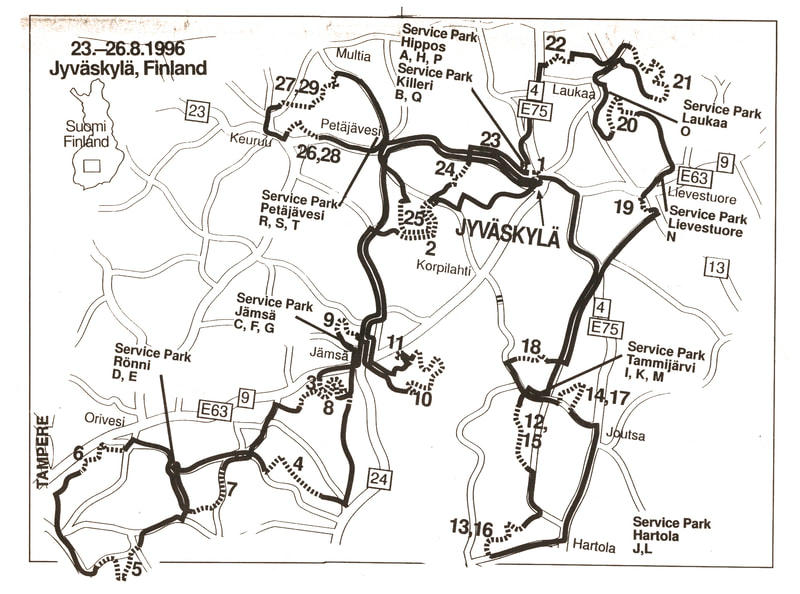 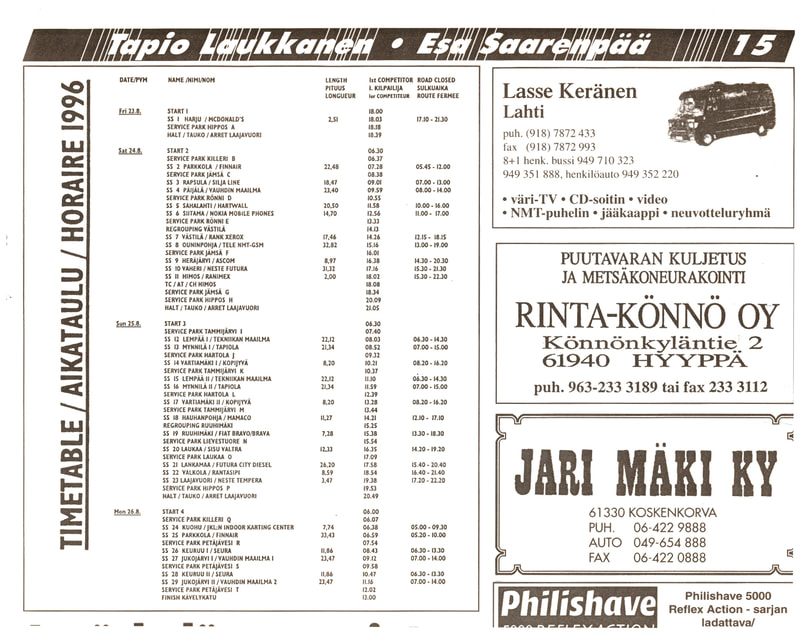 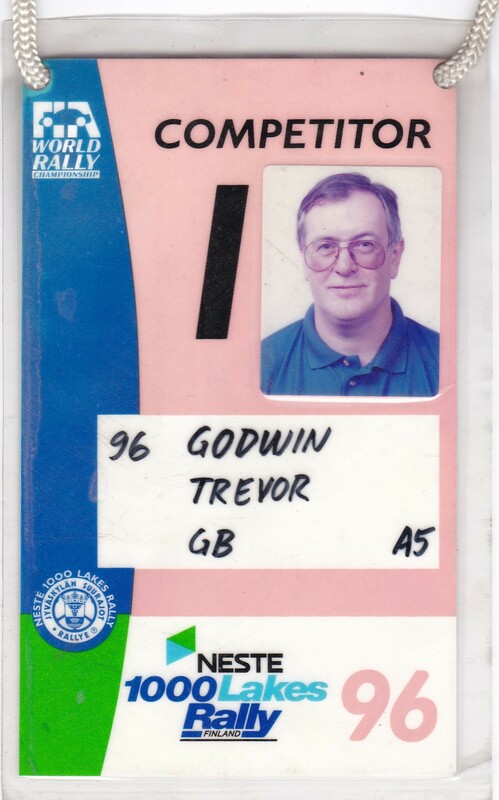 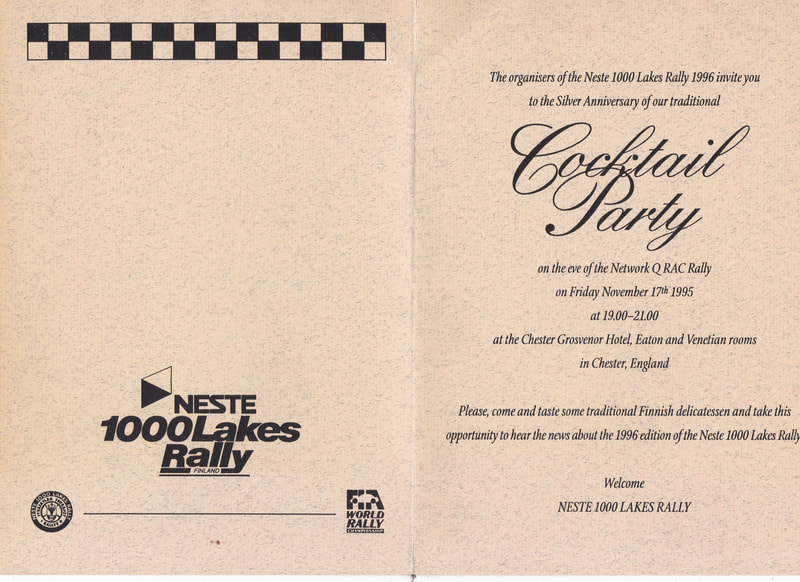 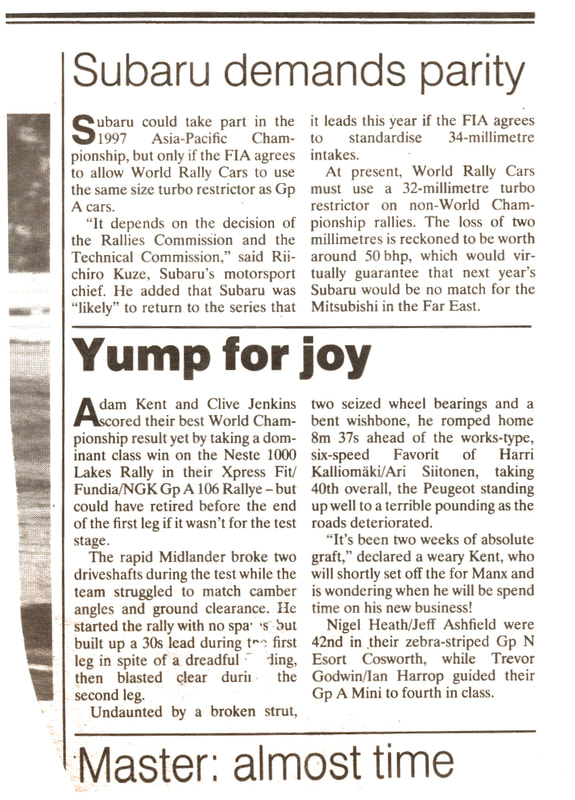 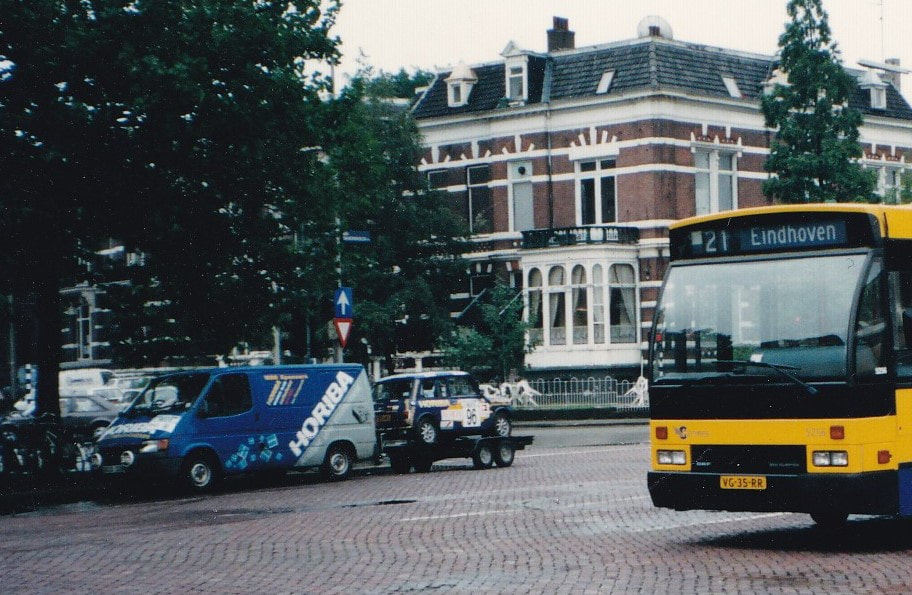 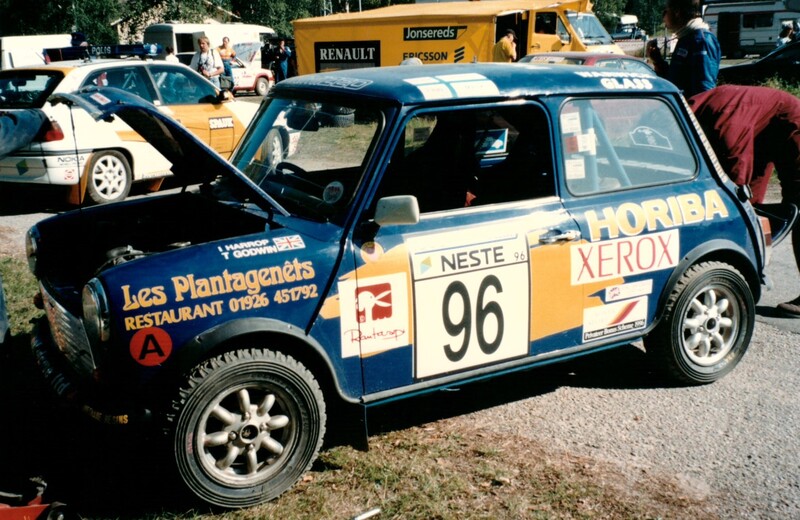 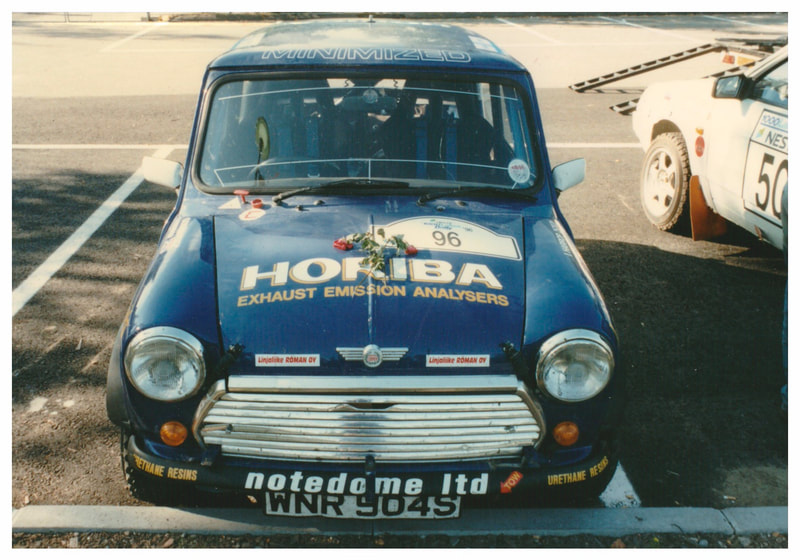 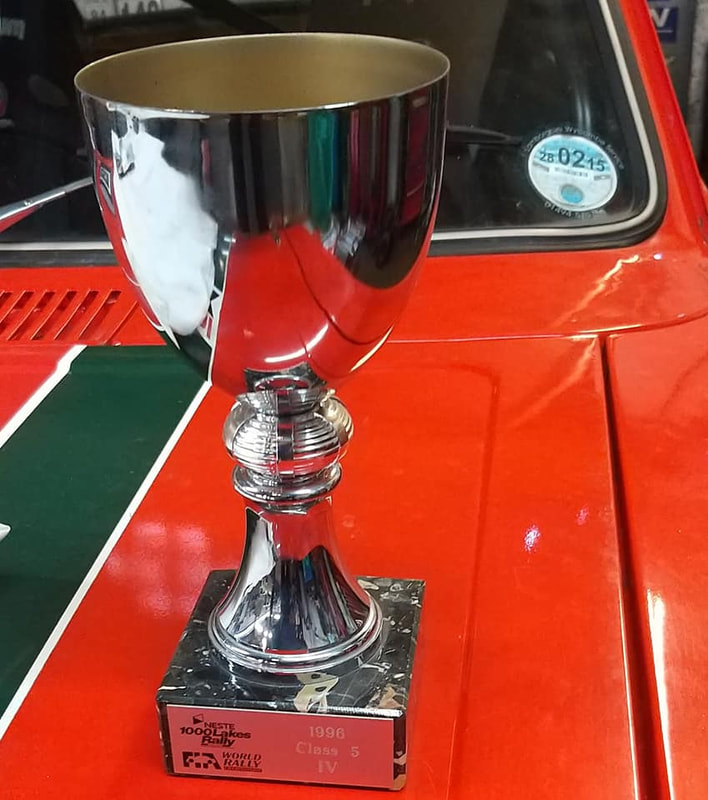 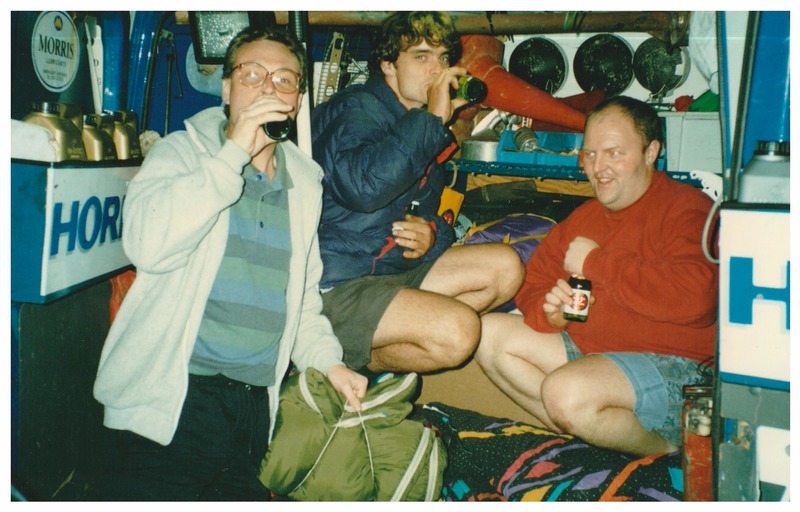 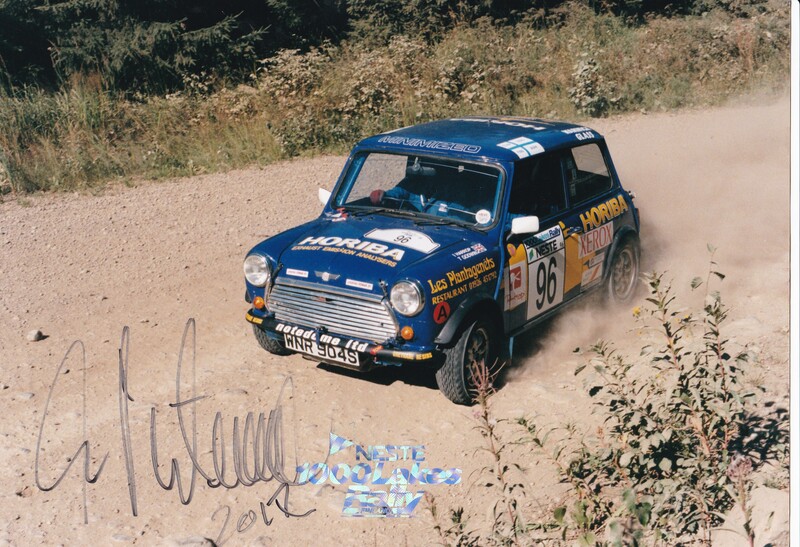 Photo above signed by Ari Vatanen who always was very interested in Trevor's endeavours
TV program above (brief view of mini at 2 mins 30 secs!)